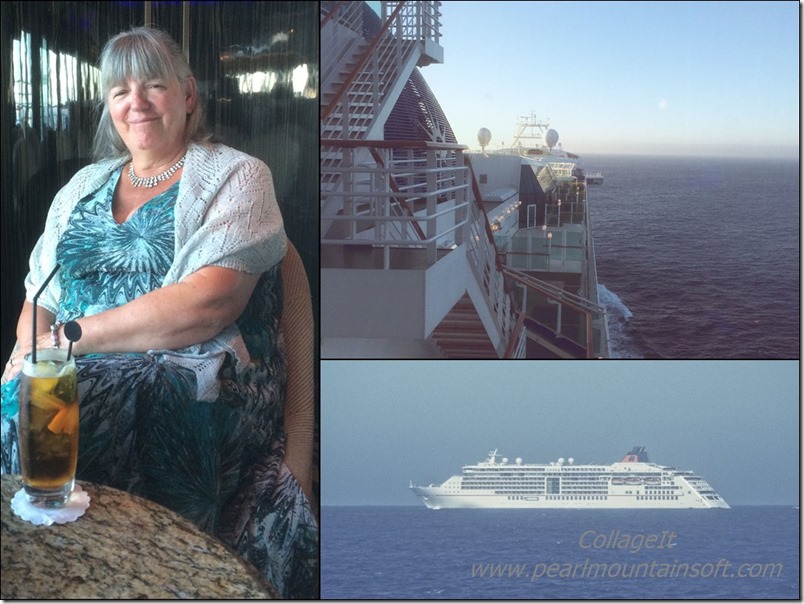 Well, not literally in the Doldrums.  We are nothing like becalmed, with winds blowing from the north at about 20-30 knots and the ship moving at 20 knots, effective wind speed on deck was 50 knots which apparently is Fresh Gale.  Cold too, with that wind and cloudy but with the prospect of some blue skies later.

Painting class today was a Tuscan farmhouse and was a lesson in using graduated washes and planning a painting.  I enjoyed it and was quite pleased with the finished article.  Afterwards we wandered round the ship.  You couldn’t do much because most of the deck and promenade are was cordoned off because of the high winds.

We didn’t see a single ship until late in the afternoon when we passed another cruise ship off on the starboard.  The weather had improved a bit.  The wind had dropped and the sun had come out, but it was still quite windy, so I took the above shot from the cabin window.  I was quite pleased with the finished article.

Dinner was in Epicurian and was an experience.  From getting my ham starter cut from the leg at the table (not the leg of the table!) to the creme brulee being flamed and the white chocolate ball being cracked open by the waitress, it was a brilliant meal.

Headliners show at night was really good, then drinks at deck 18 before bedtime.