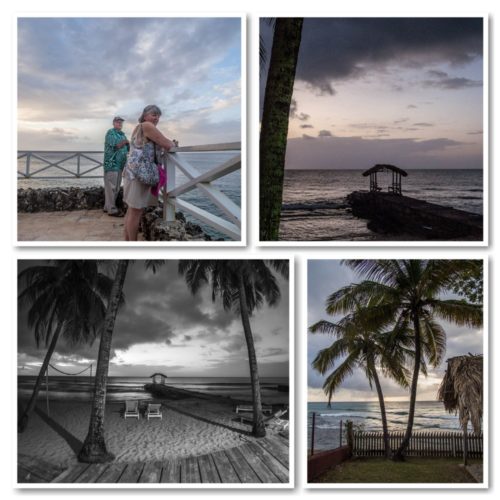 This will be a short post, because it’s been a long day and we’re up early tomorrow to go to Pigeon Point.

This morning we finished packing and got ready for the drive to the airport.  Traffic on the road through Port of Spain was heavy, but Jaime managed it smoothly and we arrived in plenty of time to check in.  Found that we could change to an earlier flight to Tobago and took that.  A smooth flight, but a bit wobbly on the final approach.  Scamp and Madeleine were not impressed, especially when the pilot bumped the plane down the runway.  It was very windy which probably explained that

Our room was ready early, so we could just go and dump our stuff before heading for the cafe for lunch which was roast chicken and chips.  After that Scamp, Jaime and I went for a walk along to Sandy Point beach.  Jaime took a shortcut through a hotel and  seemed to be deliberately ignoring the signs that said ‘Residents Only’, but maybe he just didn’t see them!!  As usual, he was a mine of information and on the way he took us through the ruins of Fort Milford.  It’s a place we saw when we were last here, but didn’t investigate.  We should have, if only to see how many times it had changed hands over the years.

When we came back, Scamp and I went to soak our feet in the hot tub, then went for a wander round the beachfront because they were giving away free rum punch.  It was rough, but it was free.  Then we all sat for a while on the balcony and watched the stars appear.

We went for dinner in the Steak and Lobster Grill next door.  Big mistake.  We had hoped that the really slow service there had improved.  Oh, no it hadn’t, in fact it had got worse.  A whole catalogue of disasters that I won’t go into here, but you’ll appreciate what I mean JIC and Sim.  Finally got served and I got my first real taste of lobster and an hour and a half later I’m still alive, so I imagine lobsters have more in common with crab and prawns than mussels and clams.

Had a rum ‘n’ coke at the hotel bar and Scamp had a Strawberry Daiquiri.  Then it was time for bed which is where I’m typing this.

Night, night, until tomorrow!  Photos will be posted later.