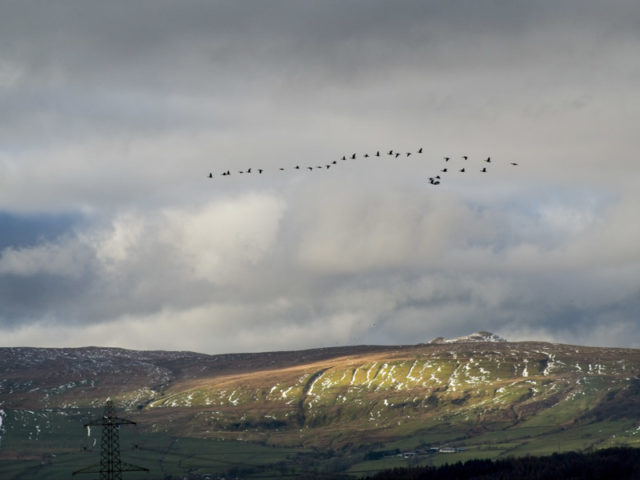 Broke the surface just after 8am, then promptly fell asleep soon after and didn’t rise until 11am.

Must have needed the sleep! Spoke to Hazy on the phone for a while, then my morning coffee mix of Cuban and Sumatran beans woke me up properly. Did a bit of sketching with Margie in the early afternoon before I got itchy feet and went out for a drive to find a PoD. I drove all round the locale before I found what I was looking for, accidentally.

I’d driven up the Whin Edge Brae, so called because of the whin (gorse) bushes that line it. I chose this location because the light on the hills looked as if it would be interesting. I thought I’d get a decent set of frames, from which I could build a panorama of the Campsies. It was while I was grabbing these images that I heard the skein of geese approaching. Finished the pano frames and then managed to frame the skein just above a spot of sunshine on the Campsie Fells. I’d like to say that they were flying south, but they were actually heading due west at the time. Just after I took the shot the whole group banked through 180º and turned due east and were last seen heading for Edinburgh, or Embra to give it its proper name. I’m guessing they were looking for a large enough field or loch to land and feed then rest for the night. I’m sure they knew where they were going.

Drove in to the STUC building tonight for Salsa and enjoyed taking the beginners through their paces with Balsero being the highlight of their night. The advanced class were a bit down on leaders, Jamie and I being the only two men there. Scamp had to stand in as a leader and managed to lead the new move, Prisma perfectly.

Tomorrow we may go the Stirling or Glasgow for some shopping and lunch.