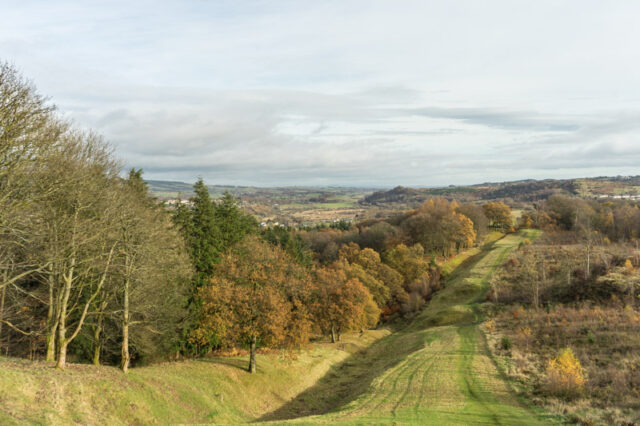 Well, that’s how we felt today.

It was such a beautiful morning, it seemed a shame to waste it just sitting around. I suggested we climb Bar Hill. We had completed the Croy Hill ascent last month and it seemed like a good use of the clear, dry weather.

We parked at The Hebo House and walked up the hill towards Croy, crossed the road and started on the path to Bar Hill. Through two gates and when the road curved to the left we went right, following the John Muir Trail arrows. They took us along a wide grassy area between banks of trees, gently climbing, but we could see ahead of us the climb growing steadily steeper. It was also a lot soggier underfoot and pure mud in places. Scamp wasn’t sure about this part at all, but we found a way through it. We’d brought our walking poles and they helped a lot, giving the security to plant our feet firmly, knowing that the poles would support us.

Once we were past the boggy area, the slope got a lot steeper. I was pretty sure the view from the top would be worth the climb and I was right. Well, I thought it was worth the climb anyway. Scamp was more worried about getting back down, but I didn’t intend to retrace our steps. I was almost sure we could take a gentler way down. That last climb took us to an Iron Age fort of which nothing really remains. There is a trig point and we stopped to take some photos. A hundred yards further on was the ruins of the Roman fort, and then I realised that the gulley that we had kept on our right hand side on the climb was actually the ditch that had contained the earth used to build the ramparts that protected the wall itself.

We walked round the ruins for a while noting what went where and wondering how they managed to dig a well deep enough to find water on the top of a hill. I suppose it’s all to do with water tables and stuff. I vaguely remember being taught about it in geography in school, and that was only a couple of years after the Romans left. Then we headed back down by the “easy” military route which is probably the way the Romans with their horses pulling carts of provisions. It was still fairly steep, but there were ruts cut perpendicular to the direction of the path and these would help with traction, but it must have been slow progress from the level of the valley up to the fort. The ice cream would probably have melted by the time they got to the top.

Just because we could, we took a new path back to the car. Bits of it reminds me of the second day at Cautley Spout in Yorkshire where we were walking on what seemed like a stream bed. This was similar in places with water running off the fields on our left and then being channeled down the path and not across it. It looked treacherous, but was actually quite easy. “Quite easy” because we had walking poles to give us support again. Back at the car we booked a table for lunch tomorrow at The Hebo House. A review will hopefully be posted in due course.

Apart from a quick visit to Tesco for messages that was the excitement over for the day. On the way down the hill the clouds had been gathering and the sunshine less often breaking through. By the time we got home it was gathering gloom and by about four o’ clock it was getting dark.

PoD turned out to be a shot looking down the hill we’d struggled up. In the pic it looks like the fairway of a golf course, but you can see where the ditch is and where the earth has been piled up to form the ramparts.

It was a good idea to go out in the morning. We had the best of the day.

Tomorrow, hopefully we’ll be going for lunch to The Hebo House.