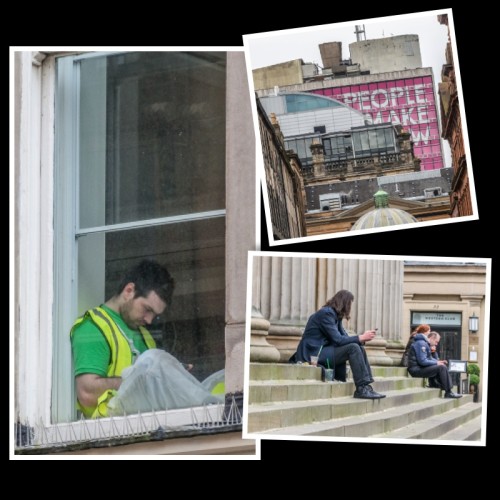 Well, there were a few bright intervals today, but they were few and far between. Since Scamp was going for lunch with Gems, I got the bus in to Glasgow to get my hair cut and have a wander. The barber was a laugh. He was a political hot wire with an opinion and a conspiracy theory about everything. While I didn’t agree with everything, in fact with very little to be exact, it was a laugh and the time passed quite quickly.  He recommended the film Idiocracy which I might just look out for. Wandered round the town looking for inspiration but found none.

I’m on the bus home now earwigging other folk’s conversations. Well, if they don’t want other people to know about their Tesco “disciplinary” then they shouldn’t talk about it on a bus and they definitely should reduce the output volume.  It seems to be the case now that people talking on mobile phones in public assume that they are inaudible to all around them.  If they were speaking to an actual physical person in their vicinity would they speak as loudly? I sometimes wonder if there is anyone at the other end of the phone connection.

Went to salsa tonight and noticed when I was sticking the parking ticket on the windscreen that the time on it was wrong.  When I checked the time of issue, I found that it was almost an hour out.  I wrote a note to the blue meanies that the machine was issuing tickets with the wrong time.  I went back and photographed the display on the machine as the iphone would timestamp the image with the correct time.  What else can you do in such a situation?  If you don’t have evidence of the mistake, it’s your word against the blue meanies and we know who Glasgow Council will believe.  I’ll check the time on the machine next time, and every time for a few weeks at least.

For the umpteenth time and the first time this year, I got a sheep tick.  It appeared on my wrist underneath my watch.  It always seems to be when I’m wearing the same jacket.  I like it, but I think I may dispose of it now.  These things are a menace.