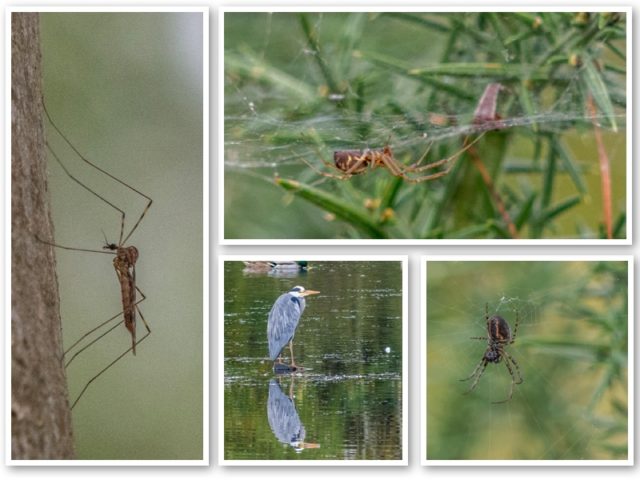 It could have been my chosen career, but I chose a different path.  That, by itself saved the populace from a bad case of genocide.  Scamp has the cold and I’ve been doing my best be head cook and bottle washer.

As part of the nursing program, I was also the driver who took us to Costa Robroyston for a cup of brown water and a spot of Costa lunch.  Can’t say I was any more impressed with the coffee, but served as a skinny cappuccino, it’s almost palatable.  Hark at me, “Skinny Cappuccino” no less!  Quite the man about town.

After we came back I went out to get some photos and maybe, just maybe, a sketch.  The sketch didn’t happen, what I did do was get some photos of underpasses, of which we have quite a few here, to sketch from the computer later.  It’s a bit of a cop out, but it sounded feasible.  I took the shots and they looked ok.  I took some spiders’ pictures too in St Mo’s.  They seemed quite pleased that I was showing an interest in their web building and posed happily while I snapped away.  Mr Grey was sulking in the cold water of St Mo’s pond.  Do birds have nerve endings in their feet, I wonder.  I also wonder if there should have been a question mark at the end of the previous sentence.  That’s the sort of thing that I would know if I had been paying attention in English back in Larkhall Academy, but I didn’t and I don’t, know that is.  Strangely, my English teacher was a Mr Grey too!  I took this Mr Grey’s photo because of the reflection in the murky waters of the pond.

While I was taking my research photos of underpasses for the proposed sketch (it didn’t happen either), I turned a corner and almost bumped into a guy lurking in the darkness of the underpass.  At first I was a bit concerned, then I realised he was just a schoolboy, presumably from St Mo’s, also presumably ‘dogging it’.  In other words he was ‘bunking off’ school.  What we, in the trade, called a ‘school refuser’ and what the pupils called a ‘dogger’.  That has nothing at all to do with dogs and also nothing to do with secluded carparks after dark.  Or so I’ve been told!! Ahem, I’ve also been told that when one is in a hole one should stop digging, so I’m laying the spade down now.  Anyway, I marched through the underpass and got the shot from the opposite side once the boy had scuttled away in the general direction of the school.  He obviously hadn’t, to quote Guy Garvey, “perfected that simian stroll”.  What he should have done was amble on in the general direction of the school with that look that said “It’s alright mate, I’m just on my way back from an appointment with my dentist / my doctor / my social worker” (delete as appropriate).  Instead he just looked like he was a rabbit caught in the headlights.  Maybe it was the first time he’d done it.  Maybe he had a good reason.  Maybe he’s on the path to become a repeat offender.  That made me think of another musical reference:  “Razzle in my Pocket” – Ian Dury.  Listen and you’ll see what I mean.

Anyway, photos took and still no sketch for the day, because the underpasses hadn’t fired my imagination.  Also, I don’t like sketching from photos now.  They seem to lack the vitality of sketching from life.  After washing up, I took a cup of good coffee upstairs to read while Scamp was watching her Tuesday soap, and there it was, today’s sketch.  It’s a bit cheeky to title it as the First Coffee.  It was hardly the first coffee of the day as I’d had my Sudoku Cup at about 11am and you can’t count Costa brown water.  It was the last cup of the day though and, like the spiders, it posed very patiently for me.  It wasn’t even cold when I’d finished.  Success.  Just in case you’re interested the paper is 110gsm Fabriano Sketch and pen is a Micron 0.3 with a bit of shading from a pale grey brush pen.

Tomorrow?  It depends on how Scamp is feeling.  Maybe the gym for me, but we’ll wait and see how the invalid is.