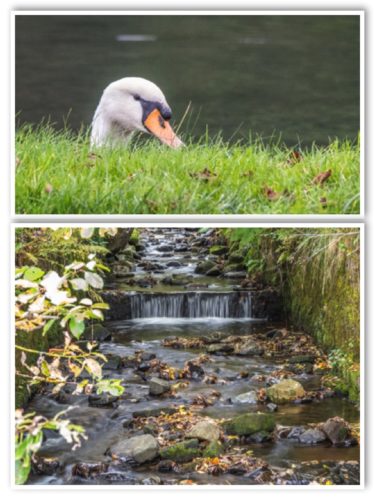 Mondays are busy days, frantic sometimes and the only way to get everything done and keep sane it to plan the day beforehand.

Morning was bright and colourful with the sun shining through the leaves.  I imagine leaves get thinner and more translucent in autumn.  I’d guess it’s because the sugars and starches are being drawn away from them into the trunk of the tree.  Anyway, the colours were really striking this morning.  I had my usual coffee while I finished today’s ‘Easy’ Sudoku.  For once, it was easy.  They’re not always like that.

After lunch, and while Scamp’s ‘Gems’ group were in practising, I went out to get some photos and hopefully a sketch too.  I’d planned to go to Auchinstarry and sketch some of the barges in the marina, but instead I went to Colzium park in Kilsyth.  Scamp and I used to go there for a walk on Sunday mornings.  We haven’t been there for a long time, maybe it’s time we went back again.  I didn’t come for the walk this time, just to sketch the house.  It’s an old house, dating from the early 19th century.  It’s owned by NLC now which means it’s closed most of the time, a great shame as it has great potential.

I settled on a seat to start the sketch and was getting to grips with it and also getting used to sketching in public.  Then a wee man who had been sitting admiring the view over Kilsyth and also keeping an eye on me came over and 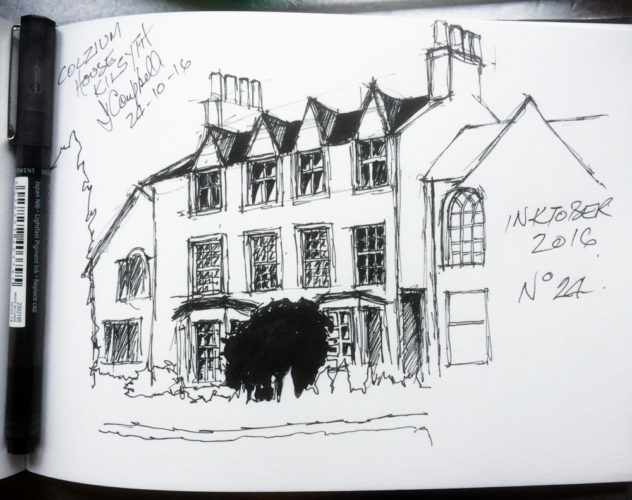 asked if I was ‘Doin’ a picture”  I told him I was and he asked if I he could have a look.  This is the first time anyone has spoken to me when I was drawing and it was a bit disconcerting, but the sketch wasn’t looking too bad, so I said “Of course you can.”  After casting his critical eye over it he asked me if I was going to make it bigger.  I suppose he thought this was just a ‘rough sketch’ and here was me thinking it was looking quite good.  I told him that this was the finished article.  He seemed bemused by this and asked why I was doing it.  Now, how do you explain Inktober to a  stranger, especially to someone who doesn’t draw?  Luckily I didn’t have to explain because he started a new tack.  “You’re no’ fae Kilsyth are you?”  He said.  I told him no, I was from distant Cumbersheugh.  He dismissed that great New Town with a “Hmmph” and after a few other bits of small talk he was off home and I’d survived my first unasked for critique.

I liked the slo-mo shot of the burn coming down the wee falls.  I also liked the swanhead on the old curling pond.  Most of all I was quite happy with my finished sketch of Colzium House.  Were will tomorrow’s sketch be from?  I don’t know, but tonight before going to Kizomba and Salsa, I had processed the pictures and loaded the successful ones to Flickr.  I’d also posted today’s Inktober sketch.  All that was left after dancing was to write the blog.  That’s almost done and it’s just 11pm.  That’s what happens when you plan your day.