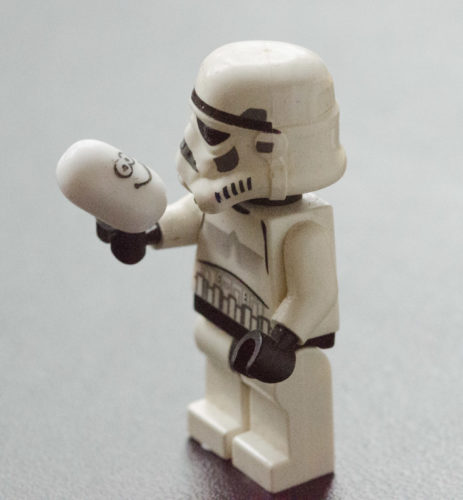 A late start today then the day was filled with some light gardening – pruning, repotting and just generally admiring our handiwork.

We were going to a 40th wedding anniversary party with dancing, salsa dancing that is, and I wasn’t particularly looking forward to it. I never do look forward to parties as most people who know me will understand. For all the years I’ve been a teacher, I’m not a people person. Look at my photos and count how many have people in them. Look at my sketches and count how many have people as the main subject. Perhaps that’s why I took today’s photo. It’s a picture of a person – sort of, it’s just not a human person. It’s a wee lego stormtrooper. That makes it two steps away from a human and he’s holding a Tic Tac head. The title is “Alas poor Yorick”.

Anyway, today was Sunday, still is, and it was a Sunday Social day too. We had considered all the possible variations of travel and came up with the best solution being to take the car and drive to deepest, darkest Rutherglen after the social. Social was good and we both got a few dances.

I think we arrived too early at the party. Too early being 7.15ish. The cake had been cut and the toasts toasted. So it was that awkward time when nobody wants to move too far. Photos are still being taken and its too early for the family to leave. Luckily, Scamp found a baby to talk to and its mum to talk to too. Then other Salseros started to arrive and Shannon began to get things organised for the dancing to begin. We danced a silly rueda and then split up into couples and started dancing properly. Despite the fact that I wasn’t drinking, because I was the driver, I did enjoy myself a lot. We congratulated the happy couple and left just after 10pm.  I had actually enjoyed the night although at times I felt like a fish out of water.

It took us much longer than it should have to get home because the slip road to Stirling was closed. Why do the motorway contractors trumpet the announcement that the new motorway is now open when from 8pm to 8am they are still repairing and finalising the construction? Be honest for once and deliver the works once they are complete.

Tomorrow? Maybe a swim and a gym.