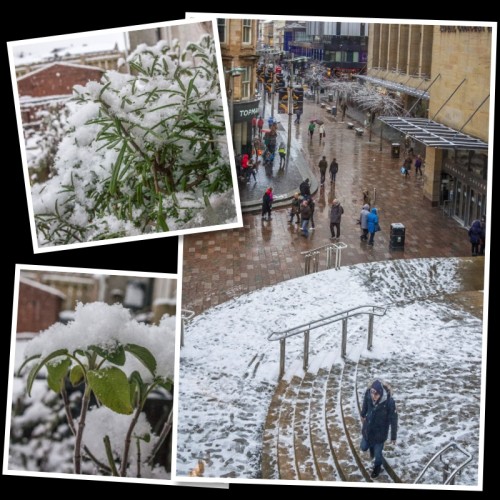 A late start after the late night yesterday.  Couldn’t really decide what to do today and the weather didn’t look as if it was going to be all that good for a scenic drive.  That being so, we settled on a drive in to Glasgow and lunch there. On the way there, the snow started falling and by the time we got to Glasgow it was quite thick.  I’ve got a dream just now about getting an iMac to replace the Macbook Pro.  I asked the Apple rep in John Lewis some questions about it.  Some she couldn’t answer, some she could, but she didn’t inspire confidence in either Scamp or me, but she had a good way of moving ‘weans’ away from the expensive ‘toys’.  We walked out and down through Buchanan Galleries then down Bucky Street to the Apple store which is closing for “remodelling”.  They couldn’t tell me when it would re-open and I found that a bit disconcerting.  What I did find out about iMacs confirmed that not only did the JL rep not know much about the computers, but also she just made up some of the answers.  Why do JL employ supposed ‘reps’ from companies when these people know nothing about the products and sometimes deliberately mislead customers.  It’s not the first time this has happened to me.

I wasn’t feeling all that hungry, so we headed back to the car park, but made a detour to the JL teashop where we had a light lunch.  Luckily, Scamp had found a seat with a good view past the Concert Hall and up Sausageroll Street.  The snow seemed to abate for a while while we were in JL, but by the time we got back to the car park it was back with a vengeance.

Back home I made good on my promise and dug out the old sewing machine.  While it was not exactly the same as the one I’d been using on Thursday, it was close enough to work out the basics.  Tomorrow I’m hoping to get some 3in1 oil and get it lubricated at least and hopefully working.  Bearing in mind that this is a forty odd year old machine, for once I will have to be very gentle.  Let’s hope that tomorrow’s blog is not titled “It’s Broken”.