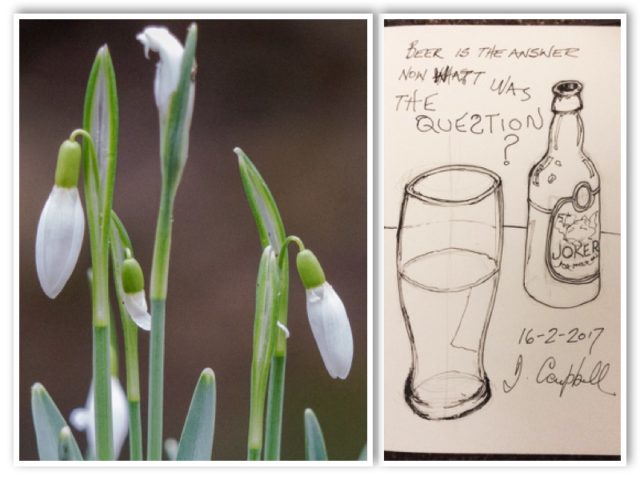 Not the group with the repetitive lyrics, but just getting back to normal.

Off to the hospital this morning to find out the results of the biopsy on Scamp’s mole.  As expected, it was indeed malignant, but was caught early enough to prevent a more serious situation.  Still some more work to be done, but the long term view is very good.

To celebrate, we had lunch at the Garrion Bridges antique centre with all the other antiques!  Cheap and Cheerful, that’s why the place was very busy.

Drove home and I went out to get some photos and hopefully a sketch.  I went down the Luggie Water and found some snowdrops and that became my PoD.  There was little else there of interest.  I drove to Tesco and tried to sketch Cumbernauld College, but it looked like a disaster, both the sketch and the building and I gave up on it, so it was later in the night I got the sketch completed.  A bottle of Joker!

Feeling a bit more ‘normal’ whatever that means now.

Hopefully bussing in to Glasgow tomorrow to celebrate our wedding anniversary.