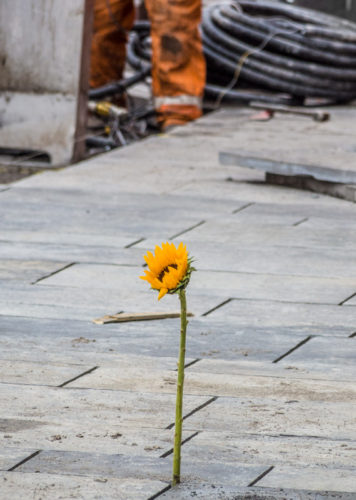 Today we got the bus in to Glasgow.  The X28 no less, the real express bus that doesn’t touch the hovels of Moodiesburn or the ice cream dungeons of Muirhead.  No, it just goes straight down the M80 into Glasgow, after picking us up in Condorrat of course.  We were going to celebrate out 44th anniversary.

After a coffee in Nero watching the tiaras and bouffant hair pieces sauntering past, we walked up Sausage Roll Street because I thought I’d seen a drawing book in the book shop there, but I was mistaken, it was in Waterstones at The Fort.  The girl in Waterstones checked for me.  Meanwhile, Scamp was in M&S getting a bargain – a new swimsuit.

Me disappointed, Scamp delighted, we walked down to Argyle Street to get some more of the bowtie print, bowtie material, some dark grey thread and a pair of dressmaking scissors.  Now don’t get excited Hazy, the ballgown is still a little way off yet.

Lunch was in Sarti’s and it was delicious.  Mine was shin of beef done in Italian beer.  According to the waiter, the secret is to marinade it for 48 hours and slow cook for 2.  Scamp had seabass cooked in orange and honey.  She said it was ok, but the spinach mash and the lentils was the star.

Walked back up to Sausage Roll again to buy Upwords.  It’s a game I’ve been playing on the iPhone.  It’s a bit like Scrabble but different.  There, that explains it totally.  Anyway, I went in to WH Smith to get a magazine to read on the slow bus home and, there was the book I was looking for!  Bought it.  That will save me a trip to The Fort tomorrow.  I bought the magazine too.

Went to get the bus back home, like I said, the slow bus.  That is when we re-met the hair pieces and hair extensions and little tiaras on legs.  Spray tanned legs on little Irish dancers.  Ten year olds, made up to look like midget twenty year olds.  All of them chaperoned by seriously overbearing and totally focused mummies.  Apparently today was the semi-finals of the dancing competition.  I think we’ll be going anywhere but Glasgow tomorrow to avoid these distorted little girls.  Childhoods stolen.

Slow bus home.  Today’s PoD was of a sunflower fixed into a crack in the new pavement being laid in Union Street.  Also, today’s sketch shows that I did learn something from the new book.  Curvilinear Perspective is a strange beast.