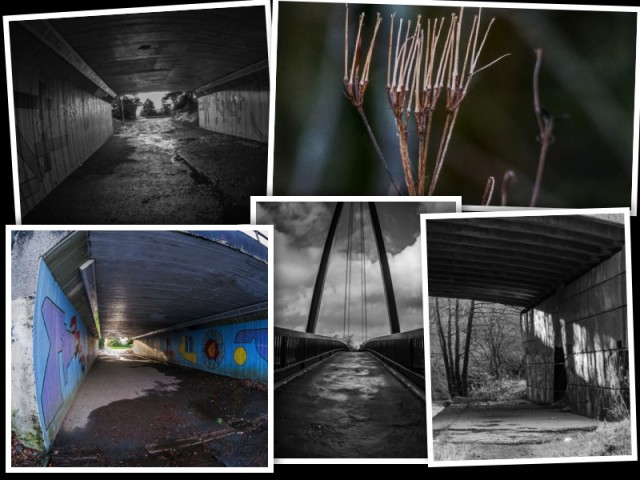 I went in to Glasgow today to get some paint – one tube of paint to be exact. Scamp was singing in the afternoon, so this got me out of the house too. I’d been looking for a new pair of boots. My old well worn Goretex walking boots were beginning to let in water. After five years of solid use that’s not surprising. For months now I’ve been looking for a replacement pair without much success. Today I chanced by Clarks in Argyle Street and there was the exact boots I was looking for. I’m not saying how much they cost, but the cost was proportionate to the cost of the old pair they are replacing. When I walked out of the shop I passed a camera crew recording interviews with passers by. On the local TV news tonight, there I was in the background. Hey, I was on the telly.

I went for the bus home, but when I got to the bus station a fire alarm started. Everyone just ignored it to start with. It’s Scotland. We find it hard to get excited about fire alarms, burglar alarms. If WW3 started we’d probably just stand and watch the bombs dropping thinking “where are the hidden cameras then?”. Eventually, when the fire wardens in their red Hi-Vis jackets appeared, people grudgingly exited the buildings. It was cold, the wind was gusting and there was a threat of rain (maybe it would put the fire out) so I decided to use my time constructively and went to John Lewis to have a cup of coffee and a scone. When I came out, the emergency was over and everything was running normally (i.e. there were no buses for Cumbernauld for about 30 mins). When I got home Scamp was gone to her gig(!) and the sun was out, so I went to take some photos. Walked along the Luggie again and used the 9mm lens a lot. I also used a Lightroom preset I’d made up to process the decent shots.

Last night the Mac crashed. Black screen, no sign of anything happening. Not a sound. Not a flicker. I eventually powered it down. Not the way you’re meant to do it, but by holding down the power button. You’re not meant to do that because it can cause problems. It caused problems. Every time I opened Finder (Windows Explorer to the MicroSofties) it would take about a minute to produce the goods. I eventually found out that it was a corrupted .plist. If that means nothing to you, don’t worry. I don’t understand either. All I know is that the repair I found on the net was convoluted, but it worked. I think. I’ll know better tomorrow when I try a reset. I can’t be bothered to do it tonight. It’s been a long day, but I’ve got a new pair of boots!

cd /Users/User/Library/Preferences/  <Where User is your user name>

Then Logout from the apple menu