One of my friends had waxed lyrical about the Tipsy Coo in Strathaven. It’s a cafe in a gallery. Us being foodies and me being interested in painting and photography, we decided to make it our Wednesday Jaunt this week. Getting parked in Strathaven (pronounced Stra’ven by the way) was a bit problematic to start with. The first place we parked was in the Common Green which is not Common (nothing is ‘Common’ in Strathaven darling!) and it’s not Green. It’s a wide street with parking in the middle. Got parked no bother then Scamp noticed we were only allowed 30minutes there, presumably that’s why we had no bother parking. From there we went to see where the cafe/restaurant was and found it without too much trouble. Couldn’t get parked anywhere near it as its carpark was full. Then we had to negotiate Strathaven’s warren of narrow, congested streets to get back to the Common Green where I now remembered there was a bigger carpark. Found it and parked.

Walked to the Tipsy Coo, and when we got there, it was nearly empty. I wonder where the occupants of all the cars had gone. It’s not exactly a thriving hub of activity, and as it was a Wednesday, everything seemed to close at 12.30. Oh well, the place looked decent, although I wouldn’t have called it a ‘gallery’. There were a couple of cartoon style paintings of highland cattle and some of foxes hanging at one end of the building and also a few photographs. One incongruously of Quiraing on Skye. Only about 250 miles from Strathaven. We ordered from the menu and waited in anticipation of a tasty and healthy lunch. I have to admit that we did get that. Mine was tasty, and I suppose it was healthy, in as much as big meals are unhealthy. Three slices of warm overdone bacon on some leaves mixed with maybe three very small pieces of avocado on a slab of toasted bread. The bread was spread with chilli jam – that was the tasty part. I couldn’t believe this had cost me £7.00 give or take 5p. Scamp faired no better. She said her quiche was lovely, but she had even fewer leaves than me (they call that a salad in Strathaven, by the way). I thought the days of ‘Nouvelle Cuisine’ were gone, but it seems they are just reaching Strathaven. We left feeling unfulfilled and disappointed. Even the paintings were rubbish.

We wandered round the town allowing our disappointment to dissipate and 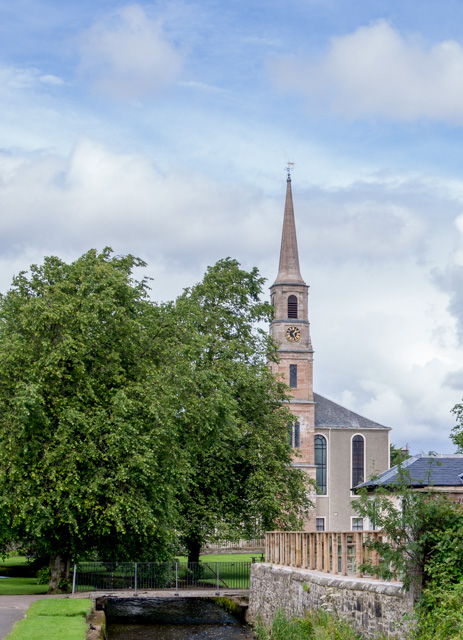 I got a couple of shots of the East Church which is a bit of a Strathaven icon. Camera started overexposing again. It did that while we were on holiday and I looked it up when we got home and found that a few people had had that problem too. No solution as yet, but I’ve changed the metering mode from my usual centre weighted to ESP which sounds very clever. I think it reads your mind and sees what you want the photo to look like and then compensates the exposure to suit. Maybe it will improve my photography too. We can but hope.

Talking about hope, I was hoping to drop in at Decathlon in The Fort at Easterhouse to spend the last of my Decathlon voucher, but when we got there, it had gone! Shutters down, sign gone, vanished without a trace. Now I’ll need to go to Braehead to get a saddle bag and a lock for the bike as my old angle bag won’t fit when I put the bike on the carrier. At least I don’t have to go to IKEA, that’s a little bonus.