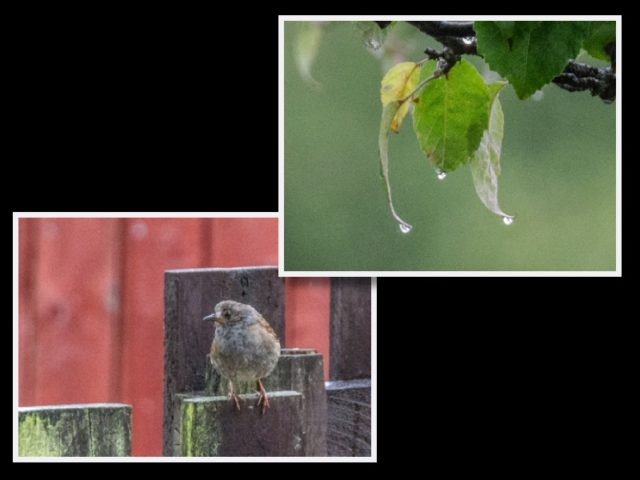 Woke with a sore throat. Actually it had started last night, but today it felt worse.  It could be the start of a cold, so I began dosing up with Vit C. The chemist once told me that when you start to feel the twinges that precede a cold, overdose on Vit C to give your body a chance to prepare. Some will argue that is nonsense, but it works for me, so that is what I did. Your body has a limit to the amount of Vit C it can hold.  How do you know when you’ve reached your body’s limit of that vitamin? Your body will flush it out, along with most of the stuff that’s in your digestive system at the time. That’s where I am at present 😉

As for the rest of the day, there wasn’t much to report other than it rained again, almost all day in fact. I managed a couple of shots from the back window while I was making dinner. Chilli con Carne for me and Peppers & Mushrooms with Rice for Scamp. Actually, Scamp had been out with her friend for lunch, so I didn’t expect her to need any food at dinner time, which is why I defrosted the mince for mine.

While Scamp was out to lunch, I took her car through the car wash. I think the poor bloke who runs it thought we had found the car somewhere. It looked like one of those you see in overgrown front gardens with flat tyres and a brushed on paint job. Once it came out the other end of the wash tunnel it was sparkling clean. When I dropped it off for Scamp to drive back from the restaurant, I noticed the cut in the front tyre. Oh dear, more expense. My car goes in for new brake disks tomorrow. It’s just an expensive time of year!

Hoping for a better day tomorrow, but not at all confident that we’ll get it. More rain forecast, but Thursday looks a lot better.