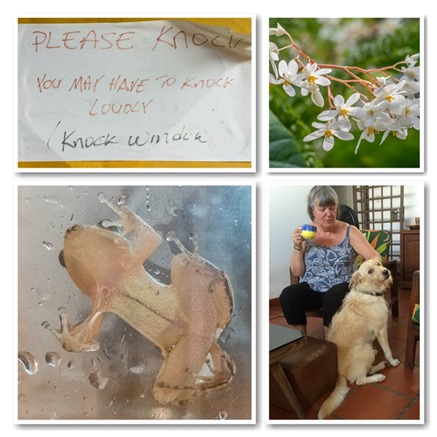 Madeleine found one of the ‘singing frogs’ in the shower this morning and managed to capture it in a jar.  It’s a tiny wee thing, no bigger than my thumb nail and that’s it fully grown.  After its photo call we let it go back to rejoin its midnight choir.

Just a coffee for breakfast this morning because we were going to the Green Market and Madeleine said we would get something to eat there.

I didn’t realise it was so far away, almost halfway to Yves’ house, or so it seemed.  When we got there the market was in full swing and there was lots for these Scottish visitors to gawp at.  Dasheen, Yams, Cassava and real live cocoa pods.  An amazing variety of fruit and veg that we had only heard about or read about in books sitting on benches right there in front of us.  After a quick walk through, we went looking for that breakfast.  We all had Empanadas – that’s fried corn bread ‘rolls’ with a variety of fillings.  I had beef, Scamp had chicken, Jaime had pork and Madeleine had cheese.  While we were sitting there stuffing our faces with these fatty foods, a lady from a local surgery was explaining how high cholesterol, diabetes and hypertension are all caused by obesity and too much fatty foods.  I don’t think this was the best place to be putting out that message – or maybe it was!  I was amazed to find Ortaniques (a cross between and orange and a tangerine) for sale on one of the stalls.  I remember getting them in Larkhall away back in the 1960s.  I haven’t seen them for years.  Three for a pound was a bargain too good to pass up.  Another stall was selling juices and they were lovely.  Scamp had a mixture of ginger, melon and coconut water.  I had passion fruit.

When we were done there, it was back in to town and a visit to another market.  This one called the Up Market.  It was a sports hall filled with stalls selling lots of different crafts.  I bought myself a copper bracelet to ward off rheumatism and Scamp got a pair of maracas to use with Gems! 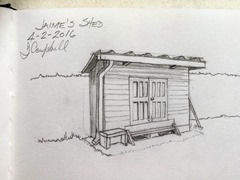 After that it was time to go home.  Nobody really wanted lunch, but there was a good selection of fruit so we had that.  You see, maybe that lady’s talk did sink in after all.  After the fruit fest, Scamp went out to read in the garden and I staked my claim on a place to sketch Jaime’s hut.  Possibly the neatest hut ever.  Madeleine says it’s not so neat inside.  I’m not sure I believe her.  Anyway, this was a pencil sketch for a change.  Unfortunately my Staedtler pencil was loaded with 2H lead, not 2B so tone was difficult to achieve.  But, like yesterday’s, it’s done.

Tonight J&M took us out to a Chinese restaurant for a meal.  The meal was delicious, but the way it was organized with veg being ordered separately from the meat was very strange.  Good food and good company.  You can’t beat it!