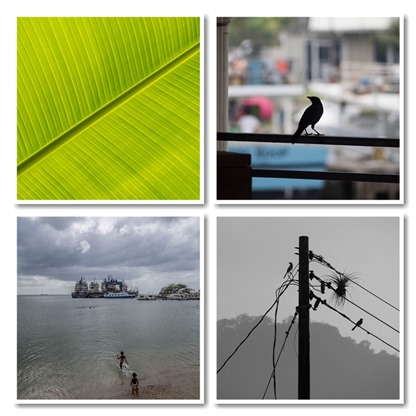 We were driving down to Chaguaramas, on the north western tip of the island, for a stroll on the boardwalk, but when we got on to the highway, Jaime discovered that he’d forgotten to take his pills, so we turned at the first available place and headed back.  On the way we stopped to get some fresh fruit from a stall at the side of the road.  At the house Jaime and Madeleine went in to drop off the fruit.  Then it was back to the highway again.  It was then that Jaime discovered that he’d dropped off the fruit, but forgotten to take his pills, so it was back round the loop for a second time, and this time he did remember to take his pills and we headed back on to the highway for the third time that day.

When we got to Chaguaramas we parked and took a walk heading east along the boardwalk.  The boards themselves are not made of wood, but of plastic coated MDF.  A strange choice for a walkway open to the ocean because it soaks up water, expands and breaks apart, but I suppose costs must be cut somewhere.  The area around the boardwalk seemed to be in a state of flux and it wasn’t clear if the area had been developed then fallen into disrepair or if it was still being constructed.  I would venture to say it was the former.  When we stopped to admire a Tamarind tree two Indian blokes came over and spoke to us.  It turned out they were putting in a quote to renovate the boardwalk area and this confirmed my suspicion that maintenance is the problem here.  As we were heading back to the car, one of he security men came over and talked to us and almost his first question was “What do you think about Theresa May?”  I have to say that most of the people we’ve met here have been very friendly and interested in these Scottish visitors.

The short beach at Chaguaramas is well used mainly by coloured bodies.  I think we were the only white faces to be seen.  It’s quite an industrial looking area, but the water was clean.  Apparently the beach is man-made.  Nobody seemed to mind that and lots of folk were out enjoying the water.  All except one wee toddler who wasn’t enjoying being washed in a cold foot bath outside the toilet block.

When we left there we went to the Cruise Inn where the other three had the strongest sangria I’ve ever tasted and I had a Heineken ‘Green Tea’.  We were going to have lunch there, but Scamp suggested we go back next Sunday for dinner and that seemed to satisfy everyone.

On the way home we stopped to buy some Hops Bread which is like a soft roll with a light crust on top.  It’s got a very yeasty smell and tastes lovely.  I’m intending to try making some when we get home. 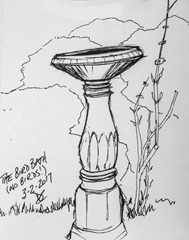 After lunch which was the recycled remains of yesterday’s curry with a slice of reheated shepherd’s pie for me I started on today’s sketch.  What you see is the second one as I wasn’t happy with the result of the first one.  I’m not terribly happy with this one either.  It’s a bit squint and not all that interesting, but it will have to do.  It’s a sketch and it’s done in time.

Madeleine and Jaime were busy all evening trying to cut through the red tape that ties up all passport applications for Venezuela.   I wish them luck in their quest.