Today was Dubrovnik and we were going to walk the walls.  Temperature prediction 31c.

We had intended to get a taxi into town and then wander round old Dubrovnik, but there were no taxis to be seen at the berth.  Then one of the shop workers called us over and sold us two bus tickets into town.  This, he said, was the cheapest way to travel.  He was right.  We got to the bus stop an waited for the bus which turned up about 10 minutes later and it was packed.  With our usual aplomb we shoved our way on and enjoyed an experience similar to that of a sardine.  We did get to the gate of the old town and for a quarter of the taxi price.  We also got to meet a lot of locals … up close!

Scamp wanted to walk round the walls of the old town.  Before we did, we had to change some of our Pounds to Kuna and found favourable rates in the information centre.  Then while Scamp went to buy the tickets for the walls walk, I went to buy some water.  I was just paying for the water when a loud american woman butted in in front of me and uttered the immortal words that became the heading for today’s blog to the girl behind the counter  –   “This isn’t water, it’s a soda drink.” It was sparkling water.  Americans.  What can you do with them?  They don’t even recognise water when they see it.

With the tickets bought, we climbed up the stairs to the walls and joined the one way circuit round the walls.  They seemed to go on for miles and took us round past that bright blue sea on outside and the orange terracotta roof tiles of the houses on the inside.  The old town is an amazing place because people live in the houses and sometimes we passed their gardens and saw folk hanging out their washing, just living their lives inside what is effectively a museum.

Halfway round the walk just before we stopped for an expensive, but welcome beer I heard another american displaying his ignorance in public:

“The bridge was built by Sala, Sala, Sala, …” <repeat ad nauseum> “ …I can’t remember his name but we fought a lot of crusades against him in the 14th Century.”

I muttered underneath my breath “You’re american.  You didn’t fight any crusades, otherwise you’d have made umpteen movies about it.”  I don’t know what they teach americans in school.  It appears that they have their own version of world history where John Wayne rights all the world’s wrongs in the name of the great american people.  I think the word he was searching his brain cell for was ‘Saladin’

After the history lesson we took a rest in a wee cafe at one of the corners of the wall and had a beer each.  Like I said, they were a bit expensive, but it was a seller’s market and they were nicely cooled, as was the cafe itself.  Then it was onward an upward, then downward then upward again to the highest point of the walls where there was a fort to investigate if you had the breath and strength in your legs to carry you up.  We passed on that challenge and 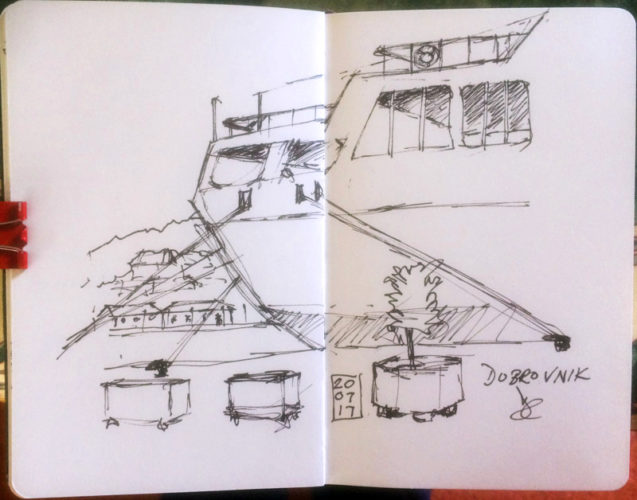 simply completed the walk.  It was hard work, but it was a great experience.  Saw some strange sights, like people working in their gardens while being watched, filmed and photographed by tourists.  Saw Asian girls happily posing on a wall with a precipitous drop to rocks and the sea below.  Saw young guys diving from rocks about 30m high, into the sea.  Marvelled at the ingenuity of the architects and builders of such a fortress.  If you ever go to Dubrovnik, you simply must walk the walls.

After that we needed some food, but we didn’t have much Kuna left and it’s the only currency that’s legal in Dubrovnik, so we had to choose our lunch carefully.  We finally settled on a wee quiet cafe down a side street where we had a salad each and shared a big bottle of sparkling water.  I simply had to put on my worst american accent and say “This isn’t water, it’s a soda drink.”

Got the bus back to the ship and caught some rays before going to our fancy dinner in Sirocco.  It was worth every penny.
Scamp had:
Amuse Bouche  – King Prawn
Starter  – Fruit Symphony
Main  – Lobster Thermadore
Lemon Sorbet with Champagne
Sweet  – Crepe Suzette

All washed down with a bottle of Chianti Classico

Funniest part of the night was the Richard sitting at the table next to us.  Richard may not have been his name, but he looked a proper ‘Dick’ and spoke like one too.  I can’t begin to describe how he made my skin crawl, but he was simply obnoxious.  He was probably in his mid 20s, but he behaved like a little six year old spoilt brat.  When his partner said she was going to have the lobster he exclaimed loud enough for everyone in the room to hear “Ooh, you’re having the Lobster.  You’re very brave.”  Then later it was “My wife has apparently decided she doesn’t want any more wine.  All the more for me.”  Really, I am rarely lost for words, but I cannot properly describe this slug of a man.  I think he had quite a few insecurities and was totally lacking any social graces.  Best forgotten.

Tomorrow is a sea day, so not much chance to do any sketches and only a limited few photos.  Highlight of the day will be a wine tasting Scamp has booked us in for.

This post was brought to you by MCA FreeWIFI hot-spot in Malta, not “McAfee” as some Welsh bloke standing next to me was telling everyone!