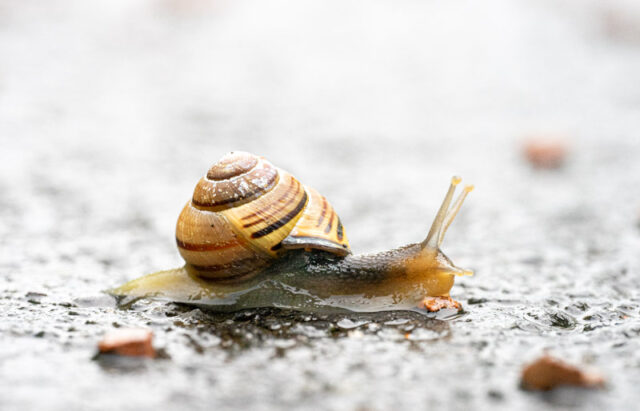 Twice I walked in the rain today. Once with Scamp and once by myself. Both times were enjoyable experiences.

It started off as a sunny summer’s day, but we knew it wouldn’t last. Our weather forecaster device, the weather fairies and the weather apps on our phones told us it was going to be wet today with the possibility of thunder storms too. With that in mind, we went out for a walk around St Mo’s in the morning before the deluge. Actually the dry spell lasted longer than we’d anticipated, but by 1pm it was starting to rain.

We got there and back again without getting too wet, in fact you could almost see the streets drying, there was so much heat in the ground. Back home I had a look through this morning’s photos and there wasn’t a lot there, so I was just considering going out again when the third wave struck and it was much longer and heavier than before. I looked again and wondered if there was just enough for a PoD. I decided to wait out the shower and when it was finally spent I dressed lightly but with a raincoat and went out to get some wet weather photos.

I found lots of slugs and snails out enjoying the wet weather. They seem to relish the rain, probably because it makes it easier for them to ‘walk’ on the rough stones of the paths. One of those shelled gastropod achieved PoD as it made its way across my path. I saw a couple of frogs and a larger toad which was a possible PoD but was pipped by the snail.

We had a short practise of the new Rumba routine Queen of Hearts as well as the Cha-Cha. It seems like the Cha-Cha will be featured tomorrow and it’s likely the teachers will also want to make sure we’ve been doing our homework on the Rumba too. Best to be prepared.

Tomorrow looks like an inside sort of day with heavy rain and thunderstorms on the cards. No great plans for a walk then!