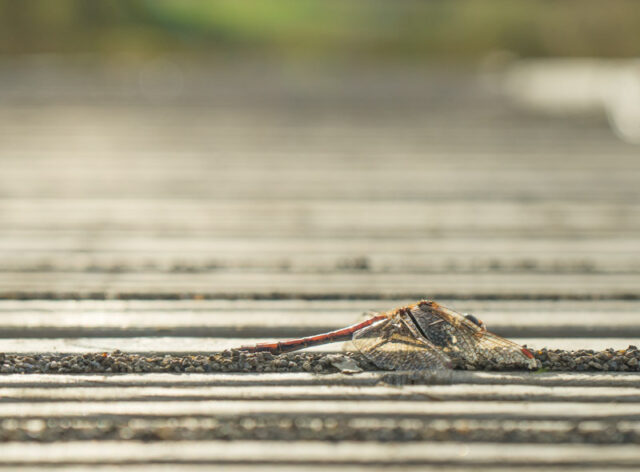 A dull day until late in the afternoon, brightened by coffee with Val

Off this morning for coffee with Val. I really enjoyed our hour of moans, rants and laughs. Coffee was just ok. You can’t say much more about it when it’s Costa’s finest :-/ After an hour of good natured conversation ranging from the technicalities of photographic sensors to the Italian method of cooking Spaghetti a la Carbonara with a nod to viewing Mars tonight and micro computers, it was time to go. We said our goodbyes and agreed we’d meet up again in a couple of weeks, all being well. He went to meet his wife, I went food shopping for lunch and dinner.

Back home and after lunch I took the new toy out for a walk in St Mo’s. I also took two pots of chestnut saplings that I’d been growing at home since February. I’d fully intended planting them earlier in the year, but things got in the way. Walked around St Mo’s trying to avoid two different tribes of school kids on their October break with nothing to do and nowhere to go. It might have been the same tribes as earlier, it might have been different ones. I didn’t look too closely. I just smiled at the dress (lack of) sense of these kids. Dressed as if it was summer, when winter is just around the corner. What worried me the most was that they were in great groups. We’re being told not to congregate in large groupings, but these idiots are wandering around in tens and twenties, completely oblivious to the risks they are taking with their health. Reminded me of a bloke I saw in Condorrat a few years ago. He had a tattoo on his arm of a biker with the logo “I’m Immortal … so far”. They say those under 15 don’t run a very high risk of Covid. That may be true … so far. I avoided most of the tribes and managed to get the saplings planted. Hopefully far enough away from the pathways and far away from the grazing areas used by the deer.

Got a PoD which is a male Common Darter dragonfly resting on the boardwalk. Looking at it full size on the computer I realised it had a lot of damage to one of its forewings. Such a delicate framework and such a short lifespan. The live fast the dragonflies. Perhaps they too are immortal … so far.

Dinner was my take on Frittata. I should have asked the Italian man this morning for his recipe. Mine was based on a recipe I’d found somewhere and on Scamp’s timing. It worked out fine for me. We scoffed it! 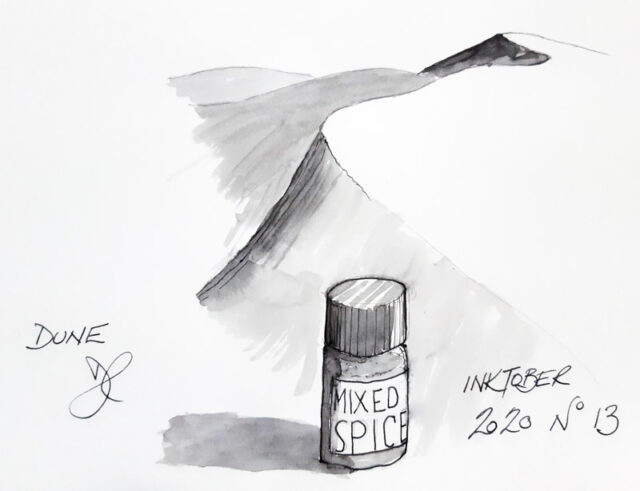 Prompt for today’s sketch was Dune.  Cryptic. I wasn’t at all settled on a solution to this vague prompt, but I finally settled for a bottle of Mixed Spice. Cryptic, like the prompt.  If you’ve read Frank Herbert’s book you’ll understand.

I got an email from Hazy today to say that Utopia Avenue by David Mitchell was on sale for Kindle today of 99p.  I grabbed it.  Thanks Hazy.  Like I said, I don’t think I would have paid full price for it, but I’ll risk a quid!

Tomorrow looks wet again, so we may be reduced to doing inside stuff.  Work, in other words  🙁