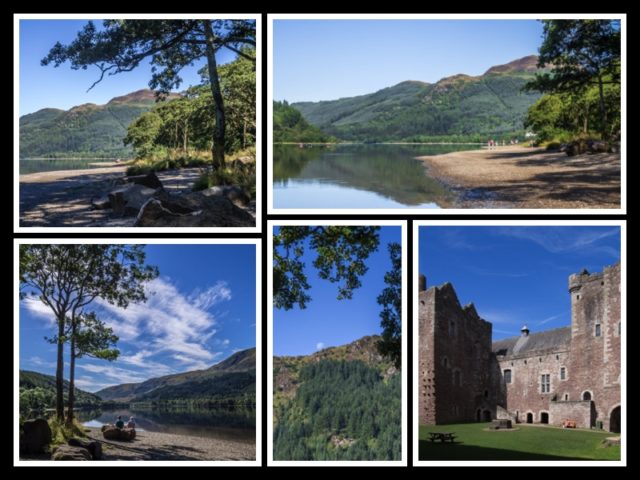 Last night we made plans to go down to Ayr, or Troon, or Largs, or Millport today. Definitely somewhere west or south west, because that’s where the best weather was to be. Today we went east, well, east (ish). Sort of north east. Not west.

We made sandwiches (pieces) and filled a flask and we left. We headed in the morning sunshine in the general direction of Stirling and thence to Callander which we hoped would be free from blue-rinsed drivers on this, our midweek journey. They usually only come out in their hordes on Sundays. Despite being in a long line of traffic behind an articulated lorry we had a fairly pleasant run through Callander and on to Lubnaig. It was Scamp’s idea to stop at the loch for a coffee. I wasn’t too sure about it to start with, but when I saw the reflections on the loch, I just knew I wanted to stop. When we stopped, we discovered that a Rabbies minibus had just arrived and there were tourists everywhere. We’re not tourists, we’re Scottish.

After coffee and fifty odd photos, we headed further up the loch and across on to the Loch Earn road. I’d half intended to drive to the end of the Loch Earn road and then drive back down the other side of the loch. I also wanted to find out where the ‘reflective man’ was. It’s a statue of a man covered in mirror tiles and it stands in the water. I knew it was on the north side of the loch, just off the road. I found it, but there were too many tourists near it. I’m not a tourist, I’m a photographer. I didn’t stop. I didn’t take the south road either, I just drove on. And on and on and on.

We passed through twee little Comrie but didn’t want to go all the way to Perth, so we turned right and pointed the car at the Braco road. We climbed up one side of a hill, across the top and down the other side, and eventually we found Braco. Braco has a main street and a shop called, conveniently, the Braco Shop. From there a signpost pointed to Stirling and we followed it and put Braco and the Braco Shop behind us. Instead of continuing to Stirling, we diverted to Doune to eat our ‘pieces’ and drink our coffee in Doune Castle, and that’s what we did.

Doune Castle is where bits of “Monty Python and the Holy Grail” was filmed. One of the great scenes in the film is where the knights pretend to ride horses while their pages click coconut shells together to simulate the sound of the horses hooves. Part of that scene was filmed around the castle. A few years ago when we were at Doune Castle an American boy pulled a couple of coconut shell halves from his bag and proceeded to clip-clop around the internal square of the castle while his mother filmed him. Like I say, he was American. When we were sitting in that same internal square today, Scamp asked me “Did you remember to bring the coconuts?” Had you worked out the cryptic clue Hazy?

While we were there, I got a sketch done of the castle tower. It’s only when you sit and study these old castles, you realise how different they are from todays buildings All the windows are different sizes and shapes, as are the doors. You can see where bits have been added, bits removed holes have been cut in the walls, only to find that they are in the wrong place, so the holes are bricked up and covered over. Just like Cumbersheugh Town Centre in fact. History repeats itself. However, the castle was much more fun to sketch than CTC.

When we got home, Scamp suggested we walk to the local pub for fish and chips and a pint. I thought it was a wonderful idea. A great end to a great day.