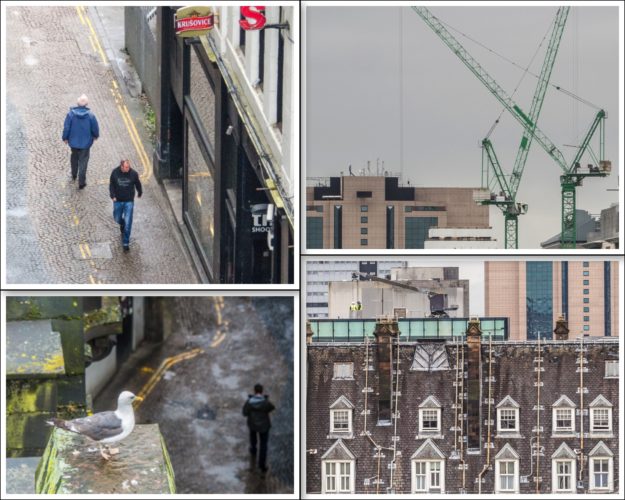 Now that normal service has been resumed to the train line into Glasgow, I accepted Scamp’s kind offer of a lift to the station today to travel into ‘The Toon’ to visit a photographic exhibition in the Lighthouse.  The cunningly titled “Nobody’s Home’ by John Maher  ex-Buzzcocks.  The blurb says: “John’s photographs of decaying man-made objects set against a backdrop of stunning Hebridean landscapes have appeared in a wide variety of publications.”  I’ll bet they have.  These are beautiful photographs up to about 2m square, obviously taken on a large format camera and mostly with wide or ultra wide angle lenses.  Some looked very staged with incongruous articles lying around the rooms.  I find it hard to believe that the average Harris crofter would have time or inclination to read Good Housekeeping magazine.  The lighting in some was confused to say the least with general illumination being achieved with ‘light painting’ using torches I expect.  However, it’s the textures he achieves that really impressed me.  That and the colours.  While the photos are restrained, they aren’t dull.  An hour well spent I think.

After wandering around the gallery, I went for a wee bit of climbing, taking the stairs up to the viewing gallery at the top of the Macintosh water tower in the building.  Strangely, my iPhone didn’t manage to record any flights of stairs climbed!  Possibly it was just a case of information overload.  It just couldn’t believe I could climb that many steps so quickly.  The weather wasn’t as good as it was down London way where the mercury was reaching over 30ºc and wall to wall sunshine.  In Glasgow it was more like half that temperature and wall to wall grey.  However, I still managed to get the shots I wanted of the backs of well known streets and interesting ‘looking down’ views.  Then I got the train back home and got a lift from Scamp back home.  Macaroni  Cheese for dinner Hazy!  Lovely.  Then I dumped the photos into the Mac and that’s where Lightroom worked on the Lighthouse shots.  A tenuous link, I know, but a link none the less.  Here’s another link.  This one will take you to John Maher’s website.  Clicking on the mosaic at the top is another link, the usual one to my Flickr page!