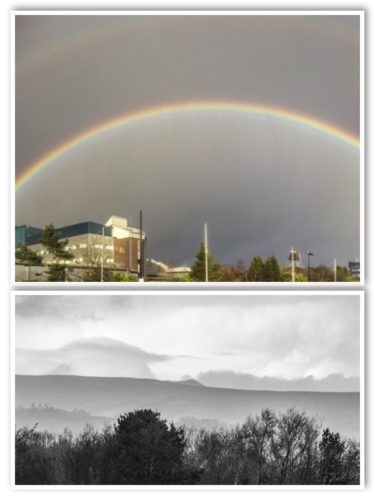 The Winter Equinox, the shortest day.  I could never remember the exact date and I always had an argument with my dad about it.  He said it was the 21st and I said the 22nd.  He was right.  He usually was about dates and things.

It might have been a short day, but it certainly was a wild one.  High winds and driving rain and in between bright sunshine, blue skies and even a double rainbow!  Drove Scamp in to Glasgow and went looking for ink for the printer that had returned from the dead yesterday.  No ink was to be found.  Another problem with older printers is that the shops stop stocking the ink because there’s not the same demand for it as printers become start being replaced by newer models.  This time it’s not the manufacturer or the retailer that’s at fault, it’s us, the consumer that brings this about.
After failing to source any ink in Glasgow, I tried the big Currys in Coatbridge.  I drove along the notorious M8/A8 to get there and it’s not a road I’d recommend for a Sunday drive.  It’s a bit of a nightmare to be honest, but I was on the easy bit.  Just as I was taking the sliproad to Coatbridge, the whole road ground to a halt and as far as the eye could see there were red tail lights.  Glad I sidestepped that.  Tried the Currys superstore and the Tesco superstore, but there weren’t any CLI-8 cartridges.  It looks like the only solution is to buy the expensive cartridges from Staples or to buy online from Amazon.

Salsa tonight was a hit and a miss.  The ‘hit’ was the 7.30 advanced class which was almost as good as the Monday advanced class.  They were too reticent and well behaved in the rueda games but got stuck in with the Glowstick Dancing in the Dark fun.  The ‘miss’ was the 6.30 improvers class where only three people arrived.  Not really enough for a class, so they were sent home with a selection box as compensation for a fruitless journey on a cold night.

More wet and windy weather (another alliteration!) forecast for tomorrow.