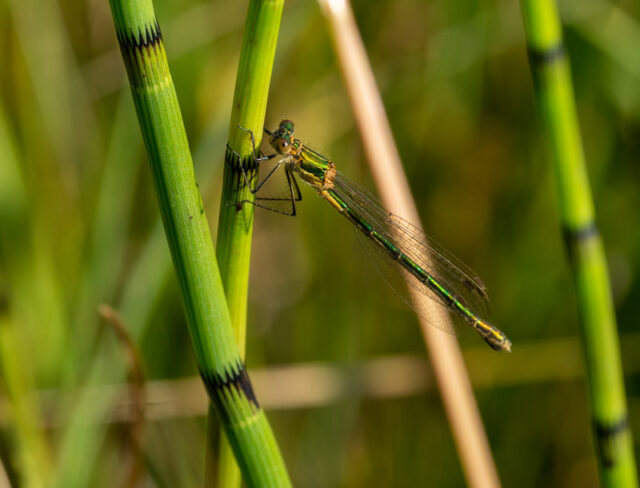 Preparation for the arrival of the electrician on Monday.

A lazy start to the day, but then the man arrived to collect some snot and some saliva. He also asked us a lot of searching questions about our habits in the past 28 days. We answered truthfully that there had been someone in our house and we’d been in someone else’s house. We also admitted to a lot of hugging and stuff with other households. Written that way it all seems a bit decadent, but some of the folk who read these blogs know exactly what was going on! The man seemed satisfied with the answers and took our samples of bodily fluids away to be tested.

With that done, and after lunch, Scamp started clearing out cupboards to allow the electrician access to the power sockets. Meanwhile I went for a walk in St Mo’s and found a PoD in an Emerald damselfly. When I returned it was my turn to go to work, hauling out, first the dishwasher and then the beast of a washing machine. It was the hardest to manoeuvre out of its cave below the draining board of the sink, but finally it was clear of the space and the the suspect power socket was revealed. The kitchen was a mess, but at least the electrician could get to work quickly tomorrow.

Spoke to JIC and heard about the latest news from down south. Good to hear that things are finally moving there.

There wasn’t much more to say about this day, so I won’t say it.

Tomorrow another man will come and hopefully he will restore us to full electrical capabilities.