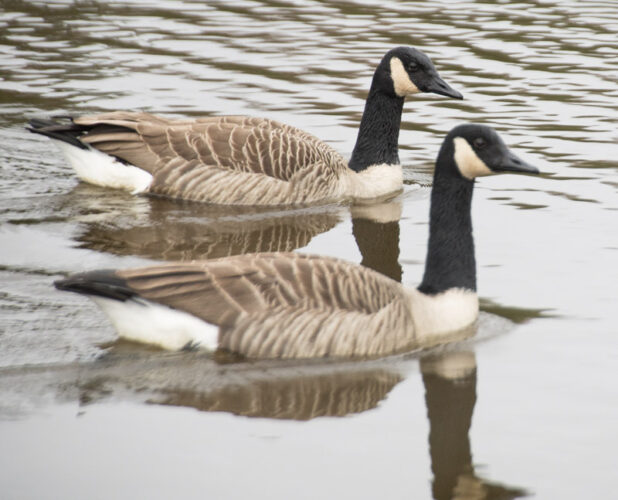 Today it was dry in the morning and it seemed a shame to waste the day.

So it was boots on and just a light raincoat, because it wasn’t really all that cold. It wasn’t warm either, well, it is Scotland in February so what do you expect? We walked down and around the Broadwood boardwalk. I attempted a few shots of a goosander that was feeding in the shallows, but the settings I was using yesterday wouldn’t be suitable for today’s camera/lens setup and the photos were junk. Lots of folk out walking along the dam wall, making good use of a dry day for a change.

On the way back home I took a detour round St Mo’s pond while Scamp headed home. Just the two circuits today and got talking to a bloke I sometimes see there. We discussed a chestnut brown headed duck we’d both just seen. Neither of us was sure what it was, then he suggested a Potchard and that sounded familiar. I checked when I got home and it looks like he was right. I’d got a couple of shots of it once I’d sorted out the settings. Later in the walk I spotted Mr Grey or one of his close relatives fishing in the reeds. However it was two Canada geese that made PoD. One of the few clear shots I had today with the Tamron 70-300mm on the adaptor.

Dinner tonight was ‘Rats’ for Scamp with a baked potato and Spaghetti Bolognese for me using mince that had been in the freezer since October 2020. Tasted fine. I might even have the rest for dinner tomorrow if it survives past lunch.

The prompt today was Golf. I’d already worked out what the painting, because it would be a painting, would be. As usual I roughed it out on the cheap Cass Art sketch book and as usual, that became the finished sketch. It’s not the best quality sketch book, far from it, but it has a lovely ‘tooth’ (the grain of the paper that catches the graphite of the pencil). It’s not so clever at holding the paint and the colours tend to be a bit muddy because the paper absorbs the water so much. It’s also not quite white, so that doesn’t help. With all that said, it’s great for working on with a pencil. 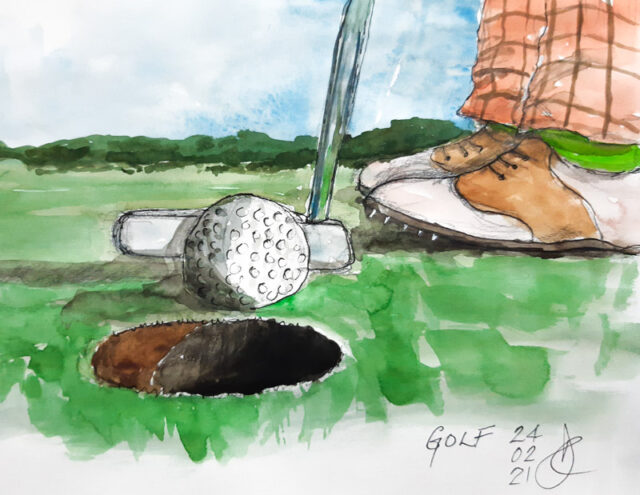 Golf is not a game I ever thought I’d excel at, and I was right. Others wax lyrical about it, but I just don’t see the point. I used to have a boss who played every Sunday and on a Monday morning all the folk in the office, including me, would skive off because he would be too busy discussing the day’s golf with the other golfers in the office. My father-in-law was a golfer too. My wife and I couldn’t get married on a Saturday morning because that was his day and time for playing golf. I think it’s the paraphernalia that fascinates people about golf. It’s the dress code, the shiny golf clubs and the language, the jargon of golf that makes them feel part of an elite group. I never was one for joining groups, elite or not. Maybe that’s why golf is not for me.

We watched Landscape Artist of the Year and we were both surprised and shocked at the artists that blagged their way to the final. I could paint better than them!

The weather looks even better for tomorrow. We may go somewhere. I’ll get the settings sorted before we go out!