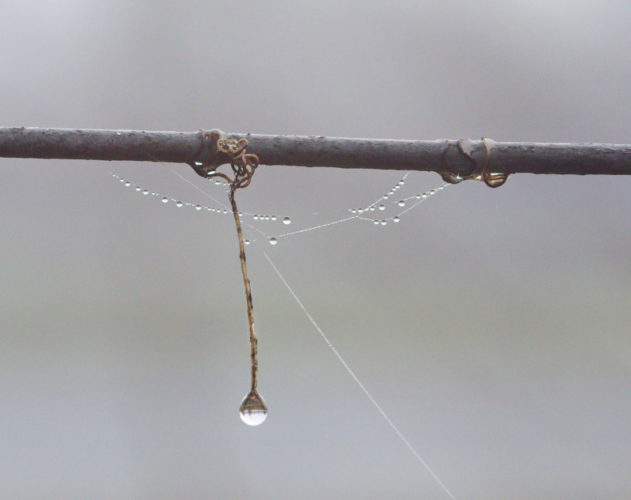 After lunch it seemed to be thinning so I took the chance to go and get some photos in St Mo’s. I managed to take just over 120. Most of these were culled in the first pass, but a few remained. Today’s PoD was from two of the best ones. The wire and the grass stem from one and the water drop from another. Fairly easily done. As I was walking home from St Mo’s the fog started to thicken again. It’s been like that for the rest of the day. Thick, then thin, but always there. Weather fairies say it will be the same tomorrow.

That was about it for our activities. Our rodent friends have been very active. I’ve dropped another packet of poison behind the wall board in the bathroom and will leave it undisturbed for a few days to allow the hungry beastie to have a feast.

I had a feast of my own.  I had about a third of a steak pie from the butchers in Muirhead.  It was a massive pie and the meat was really good, tasty with no gristle or chewy bits.  Look forward to having another third tomorrow.  Scamp had Veg sausage with her potatoes and cabbage.

Watched Alice in Wonderland on TV and a show of out-takes from The Chase. The Chase program won. We don’t often watch out-takes programs because they are so formulaic, but this one was exceptional. Probably won’t watch anything else like that for ages now.

Tomorrow we may go out if the fog lifts. It’s a bit icy tonight, so hopefully that will disappear during the night too.