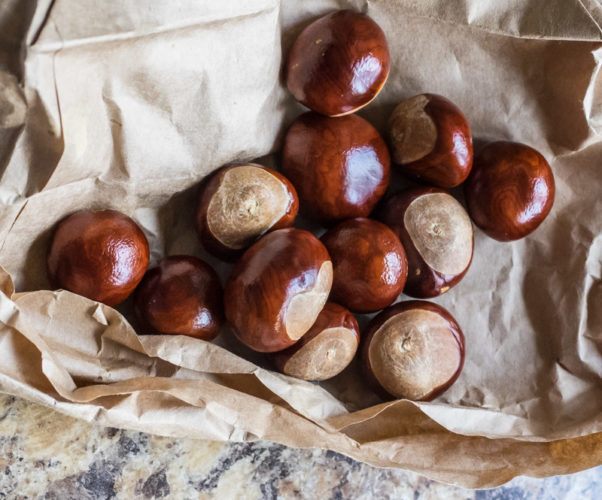 Half my order from Amazon dropped through the letterbox in the morning. After a bit of a struggle and a cautious paring away of part of the SD card and SIM carrier, everything fitted and the storage memory was installed in the new Samsung. Then I spent most of the afternoon trying to find out how to download the default ringtones from the iPhone without any success. Finally gave up and went for a walk.

Walked around St Mo’s for an hour to clear my head. Took a few arty shots, but I liked them. Found the chestnut tree had disgorged it’s autumn load of chessies. You may call them Conkers if you’re English, or even Chestnuts if you’re not from the UK, but to me they will always be chessies, because that’s what we called them when I was wee. Playing chessies at school was a great way to keep warm, and to arrive in the classroom with bloody knuckles. The twelve I brought home were destined to be PoD. Later they will overwinter in the little greenhouse and then hopefully be planted in the spring when the world warms up again.

After much soul searching between us, we finally decided to go dancing tonight and although I was brain-dead as far as moves were concerned and I also had a sore back, I did enjoy the exercise. Walking back up Bucky Street my Fitbit buzzed to tell me the 10,000 had been completed. Always makes you feel good, that.

Got home to find another parcel waiting for me. The last two bits of yesterday’s order. The new phone now has a new jacket to keep it warm in the winter. After a late dinner, we spoke to JIC and it was during the phone call that he said when referring to the ringtones, “Somebody must know how to get them.” That set me thinking. Perhaps I’d been tackling this problem the wrong way. What if somebody else had had the same problem, but they had found the solution. And so it was that some smart American in 2010 had not only found the solution to downloading the standard iPhone ringtones, he or she had also gone and Zipped them into a neat little file and posted it on the Internet. Hooray! It was the work of about ten minutes to unzip them, upload the necessary ones to the new SD card in the phone and install them. Brilliant. An afternoon wasted, but a result!! Thank you JIC for the advice. 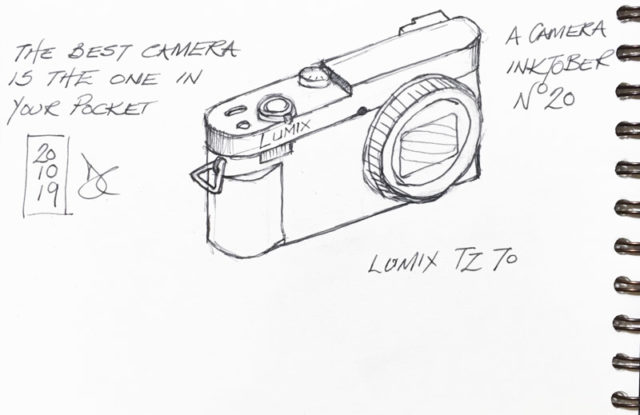 Today’s topic for sketching was “A Camera”. I think Scamp laughed out loud when I told her. “Which one will you choose” she asked. There’s a famous photogs saying :

In my case it’s got to be, either the TZ70 or the iPhone. Both immediately accessible but the TZ70 (Codename Teazer) just wins with its super zoom and the ability to shoot in RAW. That’s the sketch done.

Tomorrow is Gems day. Time for a sharp exit for me.