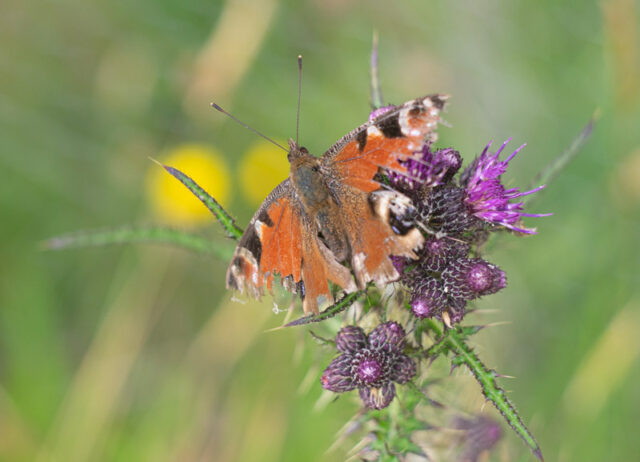 I bowed to the inevitable.

Just a short version of our Broadwood Boarkwalk walk she said, well that’s how it started out. Scamp’s fly that way. She suckers you in with the offer of a short walk, but then she adds an extension and when she thinks you’re not paying attention another half a mile is added. That’s more or less how it happened today.

We started off walking beside the road, then over the boardwalk and back towards the dam. That’s when she posed the question, “Will we just go over the dam and down the other side?” It was a lovely warm morning with barely a breath of wind so I agreed. After the dam, we could have headed back up the hill to the sports centre and home, but ’when she thinks you’re not paying attention …’ She neatly took us up past the exercise machines instead and on to the part where the path turns and twists so you hardly notice that it’s getting steeper, at least until your legs start aching. Finally we walked past the shops where she got her daily fix of pineapple. There were no fresh pineapple chunks to be had, so she had to make do with Mango, Melon and Pineapple strips which is a poor substitute for the real thing!

Lunch was a pizza we’d bought yesterday in Lidl. I think it was a sourdough base. It certainly felt like it. Sourdough is fairly tasty, but I find it quite tough. Maybe too tough for a pizza base. Anyway it was scoffed while we watched Andrew Marr who seemed appalled that the Covid 19 virus had the temerity to infect him, just as if he was an ordinary mortal. I think he was a bit lost now that Matt Hancock has had his Half Hour of fame and has resigned as Health minister after being caught in flagrante with one of his aides. Poor man.

I took the Sony out with an old Zenit Helios 58mm lens in the afternoon. It was an experiment to see how I’d manage with a fairly modern camera and a thirty year old lens. Totally manual. No auto exposure, no auto focus. Just me a camera and a lens. Actually it worked out quite well. I was impressed with the photos and one of them got PoD!  It was a battered and bruised Peacock butterfly.  I was amazed that those damaged wings could hold it in  the air, but they did as the butterfly demonstrated by flying away as soon as I took this shot.

Our dancing in tonight’s class was the best for a long time. I was impressed, but even better, Scamp was impressed. Hopefully we’l be able to build on this during the week and be able to take over teaching the class next week. That’s the long game we’ve been working towards.

Spoke to JIC and hear a bit more about Sim’s first half marathon. Scamp was really impressed with her time. Good to hear about someone doing well.

Tomorrow Scamp is off to a tea party with the witches I might be needed as a driver, but for now I’m on an empty. I might get the bike out or maybe I’ll paint.