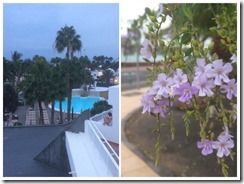 So here I am sitting on the verandah at the Riu Paraiso hotel in Lanzarote.

The day started just before 5am and we didn’t arrive at the hotel until 3.30pm, it’s been a long day.  It’s now 6.35pm and we’ve wandered around the grounds of the hotel and ventured down almost to the beach.  We’ve also drunk our fair share of beer, wine and sangria, well, you have to keep yourself well lubricated after a long flight they say.  Now we are relaxing and getting ready for dinner.  I’ve only taken a few photos today, just enough to register our presence.  Hoping to take some more tomorrow when there’s more time to explore.  Hoping also to get some sketching done.  For just now, food is the main requirement to offset the excess of alcohol!  So far we are pleasantly surprised with the Riu Paraiso.  Weather wise, it’s just a wee bit disappointing. It was cloudy when we landed and would you believe it’s actually raining.  Light rain, but the wet stuff none the less.

Later we went to the shows.  The first one was a duo with the guy singing (sort of) and playing keyboards with a girl singing. They weren’t awful, they never quite reached those heights.  Only the guy was awful.  After that was the ‘Crazy Show’  This was truly awful.  Apparently aimed at the German market, who, having no taste, thought a man with a couple of balloons up his jumper, pretending he was a girl was hilarious.  Scamp with her senseofhumour-ectomy was not amused , neither was I.  We left them to it.

I was dead on my feet and we called it an early night.

Tomorrow is another day.