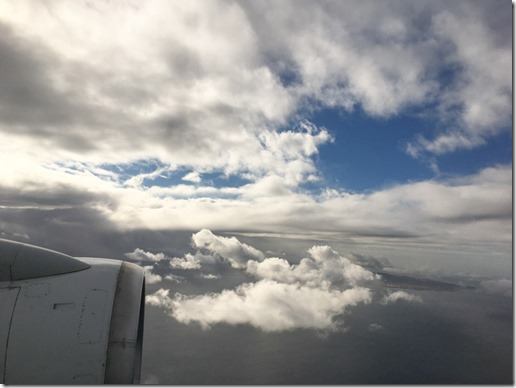 The alarm didn’t even get a chance to ring this morning.  I turned it off at 5.55am and got ready.  Today would be a long day.

Cases loaded into the boot of the Juke and we were off onto the M80 then the M8 and then parking in the multi at the airport.  All in about 20 mins.  Picked the slowest check-in queue as usual but switched to the quicker one before everyone else noticed what was happening.  Cases disposed off and through security without any trouble this time.  No scanner alert and no bags being shunted into the ‘drugs mule’ siding.  Could hardly believe it.  After the usual over priced breakfast at Frankie & Benny’s we went to the gate, boarded and departed on time.  It was after that things got a bit hairy.

It was the captain’s announcement that cabin crew should prepare for landing that started me worrying.  According to the stewardess we were still a hundred odd miles from Lanzarote and that’s about half an hour in air time.  Then when we started our final descent there was a lot of engine noise, as if the engines were labouring and instead of descending we began ascending then we’d descend again, all the while travelling through cloud without sight of land or sea.  Finally the plane started to climb fairly rapidly and when it broke through the cloud into blue sky again I assumed the captain had aborted the landing and was going for a second attempt.  Then the announcement came that the captain had indeed aborted the landing because the cloud was too low and that plus heavy rain made it difficult to see the landing lights of the runway.  He had made the decision to land at Fuerteventura which was clear of the low cloud instead. Five other planes had already tried and aborted a landing at Lanzarote and were now waiting at Fuerteventura for the weather to clear.  It had all been going so well too.

We landed at Fuerteventura amid great cheers and applause from the passengers and we waited.  Actually we didn’t have to wait all that long, only about half an hour or so and then we got a message to say that the cloud was clearing and we would be leaving for Lanzarote soon.  The captain even left the flight deck and came to tell us all face to face the reason for the failed landing and answered any questions.  Best question I heard was “What team do you support?”  His answer was “Well, what team do YOU support?”  The bloke said “Celtic!” The captain replied “Well, that’s strange, I support Celtic too!”  This got a great laugh and defused what could have been a difficult situation.

We took off on time and had a perfect landing with even more cheers and applause from the passengers.  Unfortunately the baggage handlers couldn’t quite keep up with at least seven planes landing one after another.  It took us over an hour to get our bags from the carousel, but we got a taxi right away and only lost a couple of hours of sunshine.  For some reason there were a host of protesters outside the hotel waving flags, banging drums and shouting out in Spanish.  The receptionist seemed a bit embarrassed by it all and mumbled something about banks.

Sat on the balcony and watched the sun go down.  Had dinner at the hotel and then a few drinks before we went to watch the Jukebox show which was hilarious.  Same entertainment team as two years ago, same jokes, but whether it was the all inclusive drink or the relief that the holiday had started, but I laughed all the way through this time.

G&Ts on the balcony before we went to bed, but neither of us slept well.

Tomorrow we’re hoping for sunshine and a swim in one of the pools.