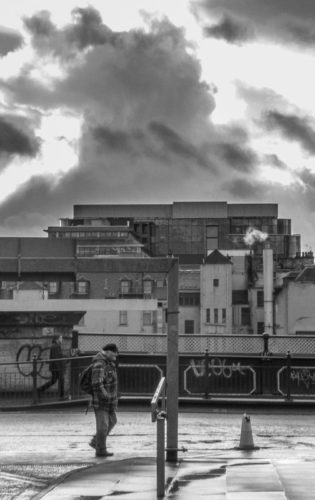 Down to Blackfriars again to begin year two of our ballroom and jive dancing. Thoroughly enjoyed it, even if I couldn’t remember Spin No 5 and then got the sequence wrong too! Waltz was good, not perfect, just good. Even Quickstep was recognisable as a dance. That’s the first class over and we survived it. More importantly, the dances survived it. Lots of folk there. Four couples which is an improvement in what we had before Christmas. I was beginning to wonder if the class would survive with so few people on the dance floor during the class.

Coffee and a discussion afterwards and Scamp agreed that we’d been ok. Room for improvement, but we hadn’t lost too much ground with our three week lay off. I tried to grab a shot outside the GOMA, but with the zoom on the Teazer at maximum and a shutter speed of 1/15th, it was doomed to failure. Luckily I’d taken a couple of shots of clouds banked over the cityscape earlier when we were leaving the car park. What you see above is the PoD which came from one of them. I’d half intended to go out early over to St Mo’s to get some ‘banker’ shots. I wish I had. Maybe tomorrow I’ll do that, because tomorrow will be a busy day too. Hopefully not as busy as today, but still busy enough.

Drove in to Glasgow tonight and for once, the 6.30 class had too many men, so Scamp got an extra half hour’s dance and to refresh her memory of Vacilala Con Paseo. In the 7.30 class we covered Estrella Complicada and the Rueda move, Bocadillo