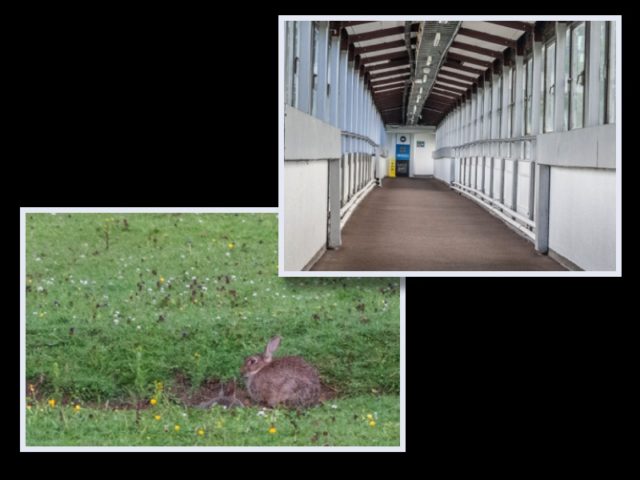 The title translates to ‘Down South’ for those of you who don’t speak ‘Furminger Drawl’.  We set off around 11.30am.  Scamp wrote a text to Hazy telling her this.  Drove through some torrential rain showers near Douglas and then further south at Lockerbie.  By the time we crossed the border we had left most of the heavy clouds behind us and were driving into sunshine.  Why does England get all the sunshine?  Is it because we get all the scenery?  Could be.

We just kept the M6 on the satnav and the wheels between the white lines.  Thank heavens for cruise control.  It’s one less thing to think about.  I’d forgotten about those square speed limit signs with the sneaky little cameras attached, but Eagle Eyed Scamp saw them and alerted me.  Cruise control to the rescue again. Only met with a couple of serious traffic jams at the roadworks just outside Manchester.   Other than that, it was very much a textbook drive.  Got to the Travel Lodge at Birmingham just around 5pm and that was with about about an hour long ‘comfort break’ at Tebay.  It was at Birmingham that Scamp actually sent the text she’d written at 11.30am!

According to the satnav, it’s only another two hours to the Hazy & N D’Ag house, but I was getting tired, the Megane needed stabling for the night and fish & chips was beckoning.  Over and out until tomorrow.

Today’s PoD is brought to you by a comment made by Fred Brown (English Teacher)  when addressing a no-hoper in his English class he would paraphrase Hamlet Act 3 Scene 1: “Get thee to a nunnery, go.” to: “Get thee to Greggs, go.”.  I always liked his sense of humour.