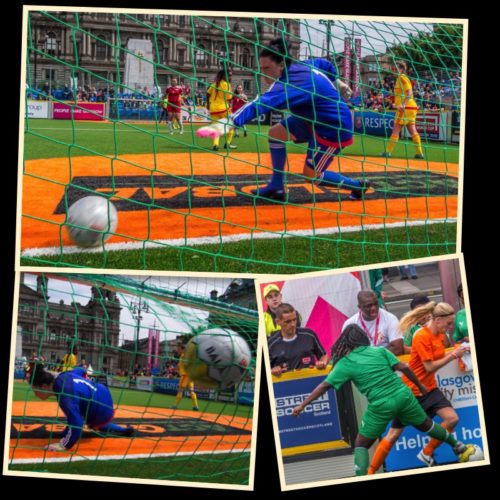 So here am I, the man who says he’s only been to one football match in his life, sitting in the stand watching the Homeless World Cup in George Square in Glasgow. How strange.

I just thought I should write a wee bit on Day One while I was sitting in George Square waiting for the teams to come out again for the second half.  I don’t know why I was so determined to go to this football thing.  I think it was the fact that it wasn’t expensively paid prima donnas who were the stars, in fact it was exactly the opposite.  The people who were playing and those who were running the show were homeless and for a week they were stars.  Good luck to them.  If I could have managed the time I’d have gone back for more.

Other than that, I put my sewing machine experience to work on repairing three pairs of jeans.  I’d torn the pockets on a couple of pairs and worn through the pocket on another – not from my mass of coins, but from the wear and tear caused by my keys.  I managed to fix two pairs by my own fair hands and the third with a little help from Scamp.  Really quite proud of my achievement.  If I hadn’t gone to that Sew Macho class in Glasgow way back in January, I wouldn’t have had a clue.  Not quite Sewing Bee standard yet, but finished what I set out to do and that’s what counts.

It stayed dry all day.  While I was watching the football in Glasgow there was the slightest drizzle, but it didn’t last long and it didn’t get any heavier, in fact, the sun came out after that for a while.  For Scotland, for summer, it was actually quite pleasant. Let’s hope it’s the re-start of summer.