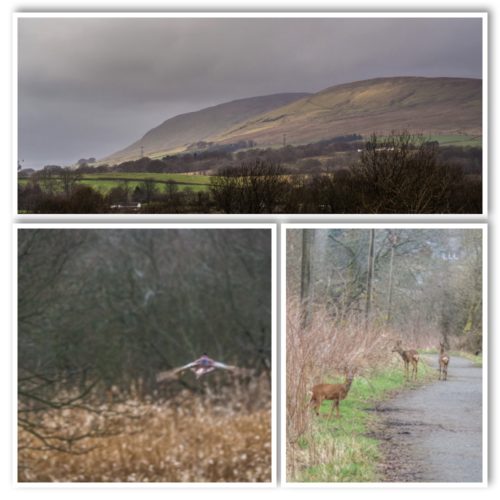 Drove Scamp in to Falkirk this morning. Went to the bookshop, but didn’t see anything of note. Had lunch in Tea Jenny’s. Does everyone have to have a tattoo and/or piercings before they can work in this place? I’ve yet to see anyone male or female in this otherwise old-fashioned tea shop who doesn’t have inking or stapling of some sort in a prominent place. I began to feel quite inadequate and not properly dressed as I looked around.

Back home, the weather wasn’t too inviting looking, but I needed something for the 365, so I drove down to Auchinstarry and walked along the railway. I spotted a group of about five deer quite far away on a little rise and tried to get some shots of them, but I couldn’t get close enough and there was too little cover to hide my approach. I was so intent on the deer I didn’t notice a cock pheasant right in front of me and only grabbed one shot as it glided away into the bushes. At that, I gave up and headed home.

I’d spent half the afternoon tracking that group of deer and still hadn’t got a decent shot of them. Then, walking home three deer appeared from the undergrowth and proceeded to walk along in front of me! I got four or five shots before they decided I just might be a threat and ran off.

Salsa tonight was a bit of a let down. Jamie G should have had a beginners class and we were half intending to help out. Only three people, not couples, people turned up. I felt really sorry for him. I felt even sorrier for myself when I had to help out with an improvers class. Not a lot of fun. Our own class was good. Doing Malecon which is an old move we learned two or three years ago.

Scamp’s singing with Gems tomorrow afternoon, so I may slip the leash for a wee while!