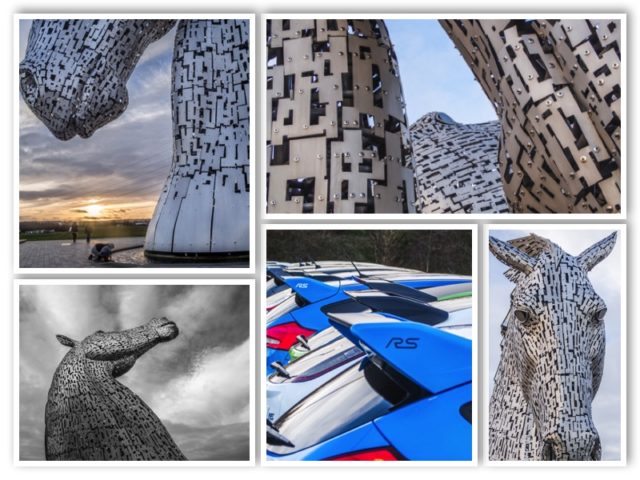 I think I must have said just a little too much yesterday and annoyed the Embra gods again.  Seriously, I thought that after the amount of work Scamp has put in this week, a lazy day for her was called for, so we didn’t rush out this morning to get the train to the second city of Scotland, in fact we didn’t get past the door until the afternoon.  Even then, I wasn’t sure where we were going as we headed east, then it occurred to me that since we didn’t want to go too far and we certainly didn’t want to go shopping, we might go and visit some old stainless steel friends – The Kelpies.

When we got there we had a pleasant surprise.  The carpark at the Kelpies was free today.  Got a few photos of some Ford Focus RSs parked in a line while their drivers discussed and compared their steeds, but it was much bigger steeds we were interested in.  We went for a walk round them and as every time before, we were blown away with them, actually quite emotional.  However, it was a bit chilly, no, it was cold and the breeze dropped the temperature even more, so we were glad to get into cafe in the new information centre.  A cup of coffee each and a bowl of potato wedges to share heated us up as we watched the last of the light go down on the statues.

Drove home and it was Golden Bowl for a Chinese dinner tonight, before we watched the final of Strictly.  Riveting!