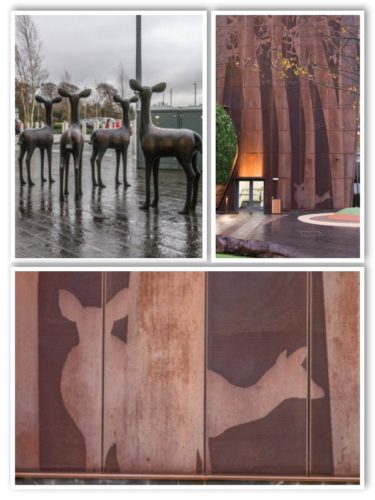 Busy morning with bread to bake and tidying up to do.  Then it was out for coffee with Val and Fred P.

Bread baked and the living room looking less like a bomb site, I headed out to meet Val and Fred.  Val needed a standard lens for his DSLR and I had a spare that I wasn’t using, so it made sense to pass it on.  Fred has been supplying me with good music all year, so now was time for me to redress the balance with some CDs.  That with some coffee and a lot of good humour took up most of the afternoon.  Fred showed me some photos he’d taken of an artwork at the dreadfully dull out of town shopping centre that is Glasgow Fort.  It’s been built at Easterhouse and in the past, a fort was indeed what that area of Glasgow needed, Fort Apace.  I decided that I’d go and see what the Fort now had to offer in the way of photographic opportunities.  It turned out it was indeed an interesting and entertaining array of street art.  Just what the Fort needed.  The other thing it needed was a bookshop to replace the greatly missed Borders that closed its doors almost exactly seven years ago.  Waterstones has moved in to fill that space and although it isn’t officially open until tomorrow, it’s looking good and will be an oasis of calm for the guys who are dragged there by their spouses.

When I got home, Scamp’s annual Witches Christmas Party was in full swing, so after a word or two to all the guests, I removed myself to the ‘Painting Room’ for a bit of peace and quiet.  Both ‘Peace’ and ‘Quiet’ were achieved with the use of a pair of Panasonic over-ear headphones while playing Dylan’s 1966 Albert Hall Concert at full volume.  I also got the crumbs from the Rich Wo(Man’s) Table in the form of Crab Cakes, Lentil Soup and Chicken Pithivier.  Not exactly crumbs either as there were copious amounts of all but the crab cakes.

I lived in the little back room working on a ringtone for my brother-in-law (why do Apple make such a simple task so difficult and convoluted?) before it was time for the merry witches to be on their way back to their respective homes.

It only happens once a year and they all enjoy it.  I have to admit that I do too, but don’t tell them that.

Tomorrow?  We may be heading for the second capital city of Scotland, but I dare not say its name for fear we will once again be forced to postpone.