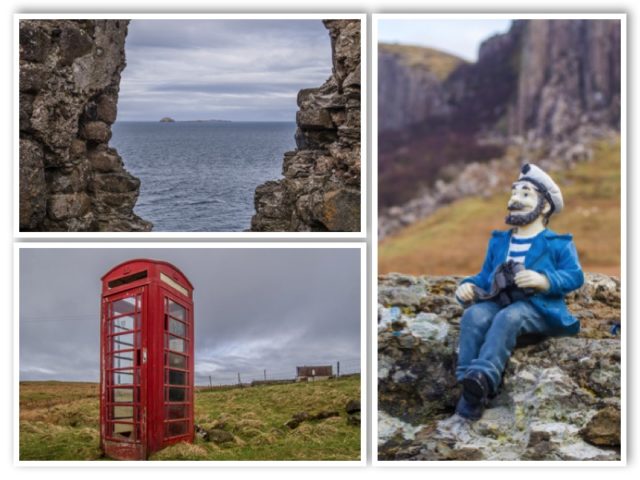 As usual, on the first day of our stay on Skye, we drove round the top end of the island.  Up to Uig and then round to Portree.

Stopped off at Duntulm to take what is an iconic photo of the telephone box there.  After that, I walked out to the ruin of Duntulm Castle.  It’s a ruin and there’s a warning at the padlocked gate to say “We advise you not to come any closer”.  It’s a bit like the warning on iPlayer that asks you “Do you have a TV licence?”  Easy to lie, easy to ignore.  Just do it.  I’d walked for 15-20 minutes in a bitterly cold wind to reach this ridiculous sign, so I just turned around and went back to the car.  AYE RIGHT!  It’s an interesting place, really remote on this finger of land that sticks out into the Minch.  Although the castle is a ruin now, the solid walls really protect you from the worst of the wind that blows in from the sea.  Took a few photos and then went back to the warmth of the car.

We drove in to Uig, but there was nothing interesting to see, so we headed on to Portree.  Lunch was in Jan’s Vans which is, for want of a better description, a gigantic hardware store.  Scamp browsed the ‘toys off the rack’ and eventually settled on a plant for the garden, but I’m pretty sure she has a list of things that we’ll be bringing back with us.

We tried to park in Portree itself, but all the carparks were full, so we drove back to Staffin and sat and watched the waves for a while.  After that I drove Scamp back to the house and I went to take some more photos.  Initially up to the wee lochan up at Floddigarry and then back down the slip again.  Saw the wee Captain model firmly glued to a boathouse there.  Went for a walk along the rocks and when I got back it was time for dinner, and a wee dram.  A fine way to end a fine day.

Tomorrow?  Probably more of the same!