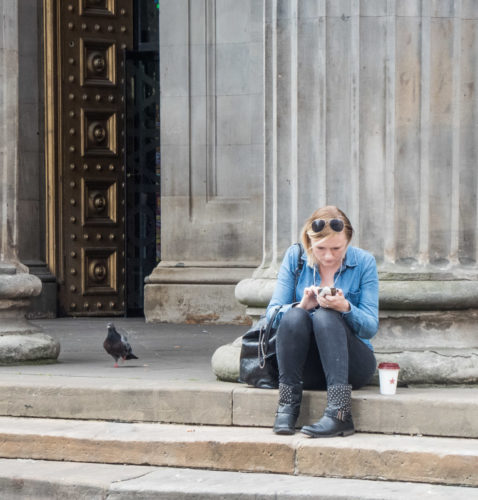 Today, a Tuesday, we were going dancing.

So far we’ve had ballroom classes on a Wednesday, a Thursday and a Friday. Today we added a Tuesday to the list. The only weekday we haven’t had has been a Monday, not yet, anyway. Today saw a definite improvement. The Waltz was better and we were introduced to the mysterious Spin 7 in Jive. Even the Tango was getting better. All of this was a miracle in itself after the black monkey I brought to the basement of Blackfriars pub.

The reason was this. When we left the house, I was ducking down to avoid a low hanging branch of the chestnut tree we park under, and simultaneously opening the car door. I whacked my nose off the corner of the door and bells started ringing in my head. I ended up with two cuts to the side of my beak. To say the red mist descended would be an understatement. The sensible thing to do would have been to go back into the house, clean the cut and maybe put some ice on my beak to halt the progress of any bruising, but when have I done anything sensible? No, I drove off with a paper hankie in one hand, dabbing away the blood when there was an opportunity. Nothing can stop the desire to go dancing. Parked in silence and that silence continued all the way down through the streets to the the basement of the pub. We arrived just in time to start the class. I firmly believe that the black monkey only leaves you when it finds some other person who deserves its attention. Some poor soul left that place with the cares of the world on their shoulders, disguised as a black monkey. Me? I was in a much better mood and Scamp breathed a sigh of relief. I don’t think she believes in black monkeys and you have to believe in them, for them to cling to you. Some call them black dogs, but for me it’s always monkeys.

Coffee after the dancing to discuss what we’d learned today and what we need to improve. We’d had a few pointers from Michael. The most enlightening for us was the importance of ‘The Frame’ and ‘The Hold’. The Hold especially made so much difference to the difficult second part of the waltz. It’s sometimes the little tweaks that make the biggest difference. The other two couples didn’t bother to use what he taught us. One couple think they know it all. The other pair have just started learning to walk upright, so it meant nothing to them. 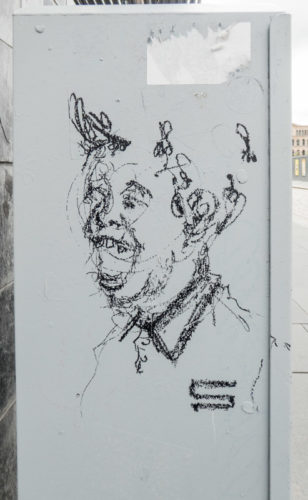 Got today’s PoD in that storeroom of photo opportunities, The GOMA. All human life is there, and a few other species too. I got another shot too. Another sketch on a junction box at the side of Candleriggs. I’ve seen one by the same artist before only a few meters from this new one. Impressive work in what looks like wax crayon or chinagraph pencil.

Home with a sore nose. I got a few strange looks, but if asked if I was alright, I had the answer off pat.