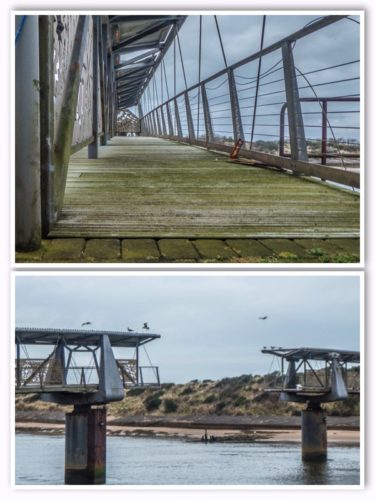 Today we were going to visit Dorothy.

After a quick lunch we headed off to Ayrshire. Met up with Colin and spent just half an hour with Dorothy who was looking good, but was complaining of feeling dizzy so we agreed that a shorter visit was ideal this time. We’ll try to visit more often now, but not linger as long as we used to. It was good to talk to Colin too and find out how the rest of the family were getting on.

Instead of driving home afterwards, we took a wee diversion to Irvine. It’s a long time since we’ve been there. Twenty five years or so Scamp thinks! None of it looked familiar. We parked down near the ‘Innovation Bridge’ which looked less than innovative in its present dilapidated state. It originally had a moving centre span, but it looks like that has now been removed completely. That leaves the ‘Big Idea’ science centre isolated and quite dead. Such a shame after so much money was ploughed into it. PoD was the view through the security gate looking across the bridge (top pic).

Drove back via Waitrose in Newton Mearns at the posh end of Glasgow. Loaded the car up with more provisions than we’ll need in months and came home. Interesting run to Irvine, but not much to see once you get there. May visit in the summer to walk on the beach. Looks like a good coffee shop there, so that may be a bonus.

We’ve just looked at Hazy’s new back garden on Flickr and are very impressed with the work. It makes the back of the house so much bigger looking and much brighter too. Good decision, even if the frogs won’t agree!

Dinner tonight was courtesy of Bombay Dreams and I think my eye was bigger than my belly. Suffering a bit, but I’m sure I’ll sleep it off.

Tomorrow? Not sure. I think we’re dancing in the afternoon at a Social, other than that, maybe a walk.