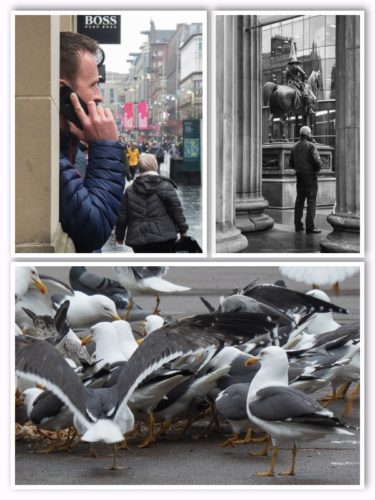 Today we took the train in to Glasgow.

Scamp offered to drive us to the station, partly because it was easy to park and partly because we are hoping to go to Kilmarnock tomorrow to visit an old friend and I will be driving. Parked, walked smartly to the station and the train drove in just as we reached the platform. That was nice.

We walked down through George Square and that’s where I saw the seagulls (aka Shitehawks) having a food fight. Too good an opportunity to miss, so I grabbed a few shots. The Teazer excels in low grey light, low contrast light. It’s not so good now in bright contrasty conditions. That’s because it’s always in my jacket pocket with all the lint and oos (Remember oos? It’s a gran word for dust and wool fibres. It’s got a hard ’S’ at the end not like ooze more like the ’S’ in keys.). Oos. Try to find some today and say the word. Remember the word. Some words shouldn’t be left to die. But I digress. The oos gets into the lens and causes flare in the photos. Today the Teazer had no problem with the soft, flat, grey light.

As we walked down the same streets as we walk on a Wednesday I realised that we hadn’t practised our ballroom steps as we should have. Must get some practise done at the weekend. I refuse to have another disaster Wednesday. Scamp was heading for M&S and we went in through the side door. I told her I’d go to Millers in Stockwell Street and meet her in ten minutes. When I went to leave by the front door, Wow! There were hundreds of people milling around on Argyle Street. No, not a hyperbole, there must have been at least 200 people there and they were walking en mass up Stockwell Street, something was up. Then I noticed that one building and a shop were being evacuated across the street. There were people with clipboards, people with coloured paddles organising other folk into manageable groups and checking off names. I went back in and phoned Scamp to tell her, just in case M&S were going to follow suit when all the folk started to walk back to the building they’d recently exited. No fire engine, no police cars or ambulances. No sirens. Either it was a false alarm or today, Friday 13th, had been chosen as a safety drill by someone with a sense of humour. By the time Scamp appeared, none of the two hundred odd folk were to be seen. Weird.

While Scamp was in a shop in Bucky Street I grabbed the shot of the bloke on the phone, talking to his Boss!!

Walked through to Cass Art and on the way grabbed my PoD outside the GOMA.  I think looks quite smart in mono.

Back home I found a parcel waiting for me. This was the second of my birthday parcels from JIC. I won’t say what it is, just that it’s very personalised and really quite funny. Photo coming soon when I get a chance to take time over the capture.

Tomorrow we are hoping to visit an old friend we haven’t seen for a long time. Looking forward to it.