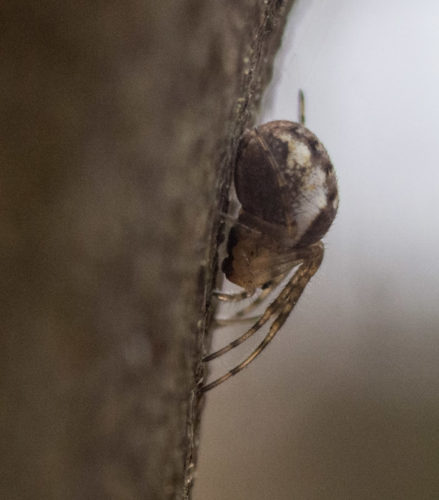 Up early, well around 9am to watch the Chinese GP. For once it was worth getting out of bed for. Great tussle between the top teams with lots of ill will on the part of most of them. My, what spoilt brats they are.

Spoke to Hazy for a while after that and then went to work in the garden. No, really. I did actually do some creative work for a change. I built up the frame for Scamp’s broad beans to grow on. Unfortunately we couldn’t find any gardeners green twine, so the actual net the will climb on is not in place yet. Not my problem mate. I didn’t put it away. I’ll get some new twine tomorrow. With the work part completed, I skedaddled to St Mo’s to get some photos.

There wasn’t much doing across the road, but I did get one photo of a coot standing on its nest. The nest looked almost as untidy as my ‘bean frame’. PoD went to a macro shot of a tiny wee spider on a tree trunk. It could only have been 3mm long. Most impressed with the result from my pair of extension tubes.  The down side, or maybe not is that the orange ladybirds I’ve been tracking have disappeared.  Flown the coop, I hope.  Hopefully if they were egg laying earlier in the week, I’ll see the results next year.

Came home and started the prep for dinner which was to be 5 A Day Chicken with Pesto. It should have been pistachio pesto, but Scamp’s avoidance of any nuts meant that I substituted pine nuts for pistachios. Apparently pine nuts aren’t really nuts at all and can be used in place of ‘real’ nuts. I was only doing the prep, because I’d spent too long in the Land of St Mo and, as we were strapped for time to get in to Glasgow to go dancing, we’d have to have our dinner after we came back.

The dungeon that is Arta was almost empty when we got there. Apparently Cameron was holding an event in competition with AdS and Rangers were getting gubbed by Celtic (as usual) and most of the guys would be there or else be too inebriated to dance. It did brighten up a bit later, or to be more precise, more people arrived. Nobody could ever call it bright. We did have a few dances and both of us tried out moves we’ve learned in the past few weeks. We really should go out more often just to practise some of our moves.

Came home and I made the dinner which turned out better than I’d hoped, but there was a lot of garlic in the mixture. Possibly (definitely) too much. Needs some tweaking, but then again don’t most recipes. Just to get them working like you imagine they should taste.

Tomorrow looks good if the weather fairies are correct. If it turns out as predicted, I’ll go for a walk along the canal. If not, then I’ll go to the gym.