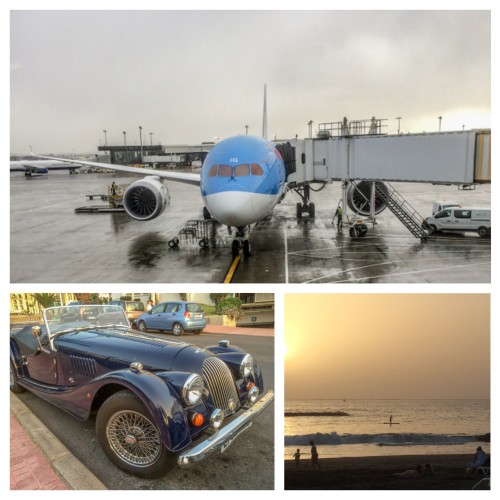 Sitting in Caledonia cafe in Glasgow airport (20 mins for a roll ‘n’ sausage and a round of toast?  Come on Glasgow) after a slow drive along the M8. Just our luck for there to be an accident on the run to the airport. Shouldn’t complain because this is the first time it’s happened. Still, we were ahead of the main rush and got through security in double quick time, even if I did have to be scanned!  Reminded me of the wee Wii man!

Arrived safely in Tenerife after a false start in Glasgow. “A wee technical problem” doesn’t inspire confidence. However it got sorted and we had a good flight down.

Big room on 7th floor with a sea view. So far, so good.  Went for a walk down to the beach in the afternoon past all the touristy shops and blokes trying to get you into their electronic goods emporium to buy their fake Canon lenses. Let’s face it folks, real Canons are bad enough, without the added (dis)advantage of fakery!  Walked on the black sandy beach which reminded Scamp of the beach at Staffin and watched the sun go down over the sea.  Temperature wasn’t quite Staffin at 24° or thereabouts.

Dinner was the usual riot with folk barging in to the queue, but the food was good, especially the salads. I’d forgotten how much I enjoyed the pickled green chillies.

Went to the kids club, but no Pepe 🙁  Scamp was quite disappointed.  Three piece group was the entertainment. They were awful. Singer couldn’t sing so he mimed. No James Brown, more like Wullie Brown.

Early bed after a couple of G & T’s.  Purely as a nightcap you understand.

Looking for a sun day on Saturday.