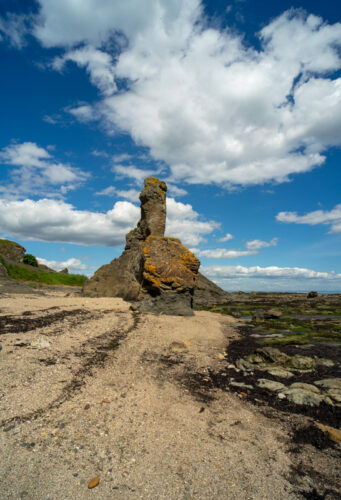 Today we were going for a pleasant walk along the Fife coastal path.

We were out a bit later than normal today, but it wasn’t far to the coastal path. It runs along the cliffs, about 100m from the caravan. The path is fairly wide and solid underfoot. It climbs steadily inland for a stretch, skirting the side of the travelling caravan section of the park. After that the path becomes a bit narrower, but still a good walking surface. Further on it’s yet another golf course that’s on one side and the sea on the other. Soon after that the path drops away after a few steep climbs on hand laid steps and then an equal number of steps down the other side, finally settling on level with the rough beaches and boulders.

The biggest of the boulders stands next to the Rock and Spindle which is a sea stack, part of a volcano which erupted about 295 million years ago and punched through the pre-existing rocks. So says Mr Google anyway. The Rock is an impressive towering chunk of basalt. The Spindle is about 4m diameter, roughly wheel shaped and with a radiating pattern of something far too difficult to explain here (in other words, I don’t know).  As you can see,  The Rock and Spindle made PoD for today. We walked a bit further on, but the path became very vague after crossing a rock fall and we decided that although a coffee in the clubhouse of the golf club might be very nice, we couldn’t see an obvious way to get to it from the shore, so we headed back towards civilisation. Rather than climb all those steps up and over a bit of headland, I suggested we walk round it on the beach and meet the path on the far side. That seemed to be the sensible solution and, strangely for one of my brainwaves, it actually worked. We though we were doing well on this trek and were congratulating ourselves on our achievement. Then we were passed by a couple of runners, one going one way and the other going the other. How crazy do you have to be to run on an undulating path with stepping stones on a blisteringly hot day? As is usual with long walks in unfamiliar territory, our return seemed a lot quicker than the outward journey and we were soon back in the caravan.

Tonight’s dinner was to be a salad with a cooked chicken. To that end, we drove to Morrisons and bought the essentials for dinner, plus a bottle of beer for me and a couple of cans of Pimms for Scamp. Drove back and sat on the decking with a Pimms for Scamp and a beer for me. You could see how these static caravans worked, or to be clearer, how the people worked with these caravans. Mostly they seemed to be empty during the week, but at the extended weekends that seem to be the way things are now, they got busier. Today is Thursday and already there is more activity around caravans that have been empty since we arrived. Also the age of the people seems to be tending to the younger groups. Maybe the retired community live here all week, possibly for weeks at a time while those condemned to work for a living 😏 make use of the facilities at weekends.

I haven’t mentioned the weather much.  Perhaps that’s because I didn’t want to spook things.  The weather in Fife has been extraordinary.  Blue skies, light clouds for most of the time.  Just the very occasional light shower, the edge of a cloud.  Quite breezy, but oh how a caravan creaks an clicks as the aluminium panels heat up and expand it the sun. Then in the evening you have the same acoustics as the same panels contract again.  Also, as Annette is quick to tell you, you’re living in a tin can with little insulation, so the heat can be oppressive and the cold, severe.  Luckily we only had to suffer the heat.

Dinner was just as we’d intended Chicken and salad leaves with some crusty bread. We relaxed for a while on the decking with a ‘thin’ G&T each. A long day ahead tomorrow and a drive home. It had been a great few days and we must thank Annette for her offer!