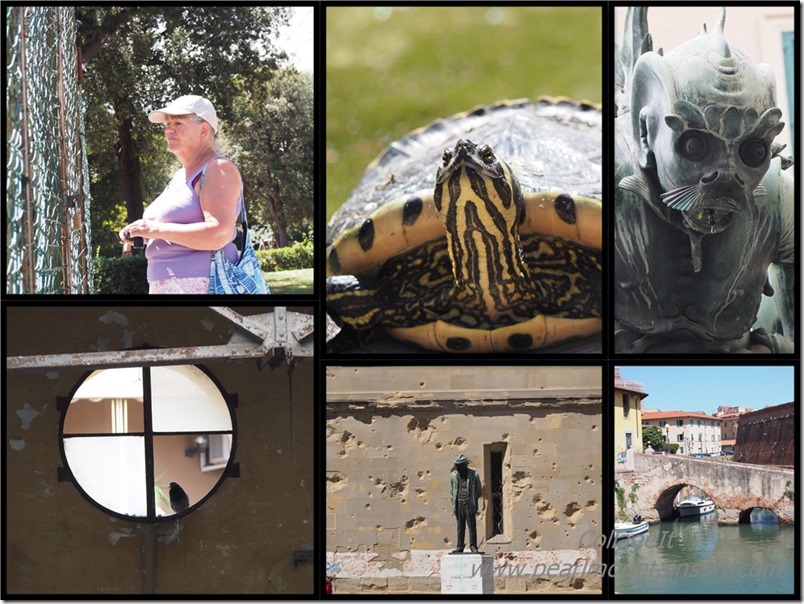 It’s Livorno today and yes, the sea was a bit rough again last night.  I don’t think it was as rough as the night before, but maybe we were just really tired and fell asleep more easily.  Anyway, as I said, it’s Livorno today.  Livorno is an old friend.  It’s the port for Pisa or Pizza as the great unwashed call it.  It’s also the port for Florence (who was the cow in Magic Roundabout, strangely there isn’t a town called Zebidee, at least not in Italy).

We were not going to Pisa or Florence or even Pizza.  We were just going to Livorno.  It’s got lots of places we like like the big town square that is actually a big long bridge over one of the canals.  It’s got a flea market much like The Barras, but Scamp doesn’t like it.  You can get a pair of jeans there for €2.  One careful owner, well at least one anyway.  You know all those charity bags that drop through your letter box?  Guess where a lot of that stuff ends up.  We walked round most of the places we’d seen before, but like we do on Skye, we were looking for new roads, new places we’d never been.  I thought I could see a park on the outskirts of the town along the road from the Town Square Bridge. This would be our new attraction for the day.  It was a strange place.  First there was an imposing sandstone building that looked like a courthouse or a council building of some sort, but it was boarded up and locked down securely.  Next was a dog park, well, that was what it looked like.  There were a couple of jakies  hanging about and a man walking a pair of serious looking dogs.  There was a sign about dogs and I took this to mean that it was it was a dog walking park.  Not the sort of park you’d take Vixen to JIC.  More a Carbrain style park, but without the knives!  Next was the park proper.  It looked like it had been a substantial park at one time with a mini-zoo and a boating pond, but it had fallen onto hard times and was in need of a fair bit of TLC and money thrown at it.  Such a shame.  There was a fountain, or at least what had been a fountain.  Now it was just a pit with a brick surround and some dirty green water in the middle.  There were dovecots without any doves.  There was a pond with ducks, geese, pigeons and terrapins.  There must have been at least twenty terrapins sitting on rocks warming themselves in the sun.  Over by the side of the dried out boating pond was what looked like a factory, also fallen into disrepair.  With the sun shining through the gaps in the roof and also in the round windows on the far side, there were textures galore to capture.  Really now it’s a roosting place for even more pigeons.

Once we left the park, we retraced our steps back into town to find some free WiFi.  The first place was ok, but I couldn’t get the laptop to connect.  A mixup with what I thought Scamp had ordered and what she actually wanted and also the fact that our waitress seemed more interested in keeping up with her Facebook and email conversations than in actually making our coffee, coupled to the fact that I’d got the password wrong, meant we left under a cloud.  Not a digital type cloud computing type cloud either.  We found another coffee shop quite easily and got connected easily there.  Also, Scamp was a bit more accurate in indicating exactly what pastry she wanted, so we all left happily.

Back at the ship, Scamp headed for some sun time, while I grabbed my drawing stuff and got the bus back into town.  Before I went, I tried out the free Port WiFi and got connected immediately with no password.  Just goes to show that we in the UK are lagging behind with the digital connections.  Glasgow apparently now has free WiFi in the city centre although since I’ve discovered the speed of 4G, I’ve never felt the need.  Wandered round the town again and got Hazy’s welcome text.  Actually, I really was thinking about texting you H, to see what the outcome was.  Really pleased for you.  Got the sox by the way!  After that I sat and sketched one of the buildings I liked in Livorno.  I’d photographed it last year and tried to paint it from the photograph.  This time I took my courage in both hands, sat down and drew it.  Unfortunately, the painting teacher was wandering around waiting for the bus back to the ship.  Also one of the African “Lookie Lookie Men” was hovering around trying to sell me a selfie stick.  He tapped me on the shoulder and said “Bueno!”  I think he thought if he praised me he’d get a sale.  Sorry mate, it doesn’t work like that.  Got the next bus back to the ship and found that Scamp was checking out the inside pool because the sun had gone in behind some clouds.  Found her and found that the sun had reappeared and the roof had been retracted.  Did a bit  of gentle swimming and jacuzzi lounging before heading for the cabin to prepare for dinner.

Scamp has wanted to sign up for Freedom DIning for some time.  What it means is that you don’t have a set time or a set table.  You just turn up and say you are happy to share the table with whoever is there.   Sometimes it works out fine, sometimes it’s a disaster.  The good thing about it is it’s only a disaster for a couple of hours, not the rest of the holiday.  Tonight was one of those disasters.  The couple at the table were fine.  Then two dobbers arrived.  The guy was ex-police and he started explaining where the French police had gone wrong in dealing with trouble at the Euro football thing.  He then went on to tell all and sundry what a clever guy he was.  Oh dear.  At school I had a friend called Arthur Cunningham although the name is irrelevant.  He was the first one I ever hear talking about ‘Pigs’.  I always thought of them as police or polis, never ‘pigs’.  Now I see where he was coming from.  This guy was a pig.  So was his wife.  She just wanted to inject herself into every conversation.  ‘She had done this, She had done that.  If she hadn’t done it, her grand daughter had done it.  Strangely, her son and daughter hadn’t done all that much. I pitied the other couple at the table.  They had done interesting things too and so had their sons and daughters and their grandsons and grand daughters, but the pigs didn’t allow them to talk about it.  Maybe Arthur was right after all, all those years ago.

Well, it’s nearly midnight.  Time for my beauty sleep and to face the port for Rome tomorrow.  Hope we have Welsh folk, not pigs at breakfast.