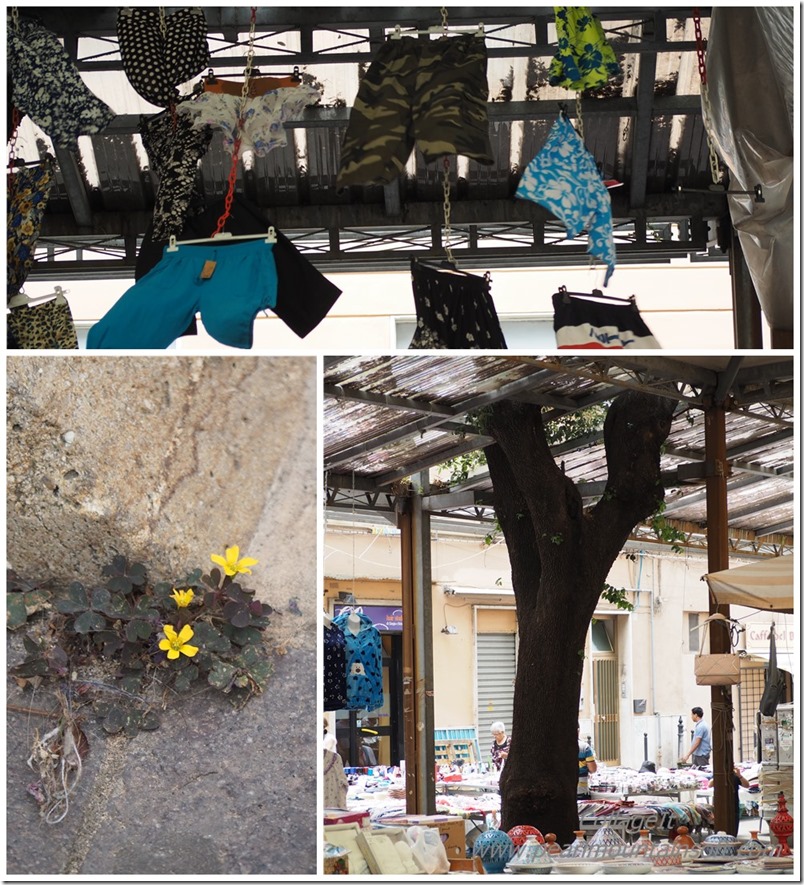 Our second and last day in Italy dawned dull and cloudy, but with a 26knot wind.  Civitavecchia was going to be busy today.  We were the second cruise ship to dock.  The Queen Victoria of an unknown to Scamp line was first.  No sooner had we docked than the enormous Harmony (monster) of the Seas.  It really is ginormous with a capacity of around 8000 punters.  It looks like a block of flats that’s fallen into the sea and floated away.  I was going to photograph it, but I didn’t have a wide enough angled lens.  Just joking, of course I had a wide enough lens in my arsenal, but you get the meaning.  I don’t like slabs of steel like this, pretending they are ships.  This one we are on is big enough, in fact it’s probably too big.  One step down would be fine for me.  Big enough to give you the space you need, but not so big that you spend the first week of your holiday trying to find your way around.  Possibly the worst design feature of this behemoth is the inside balconies. Really, I ask you what use is a balcony that gives you a view other balconies across the middle of the ship?  Is this a feature for those who live in flats at home and WANT to look into other people’s lives rather than the ports and scenery passing by?  Not for me.  As I write this, one of the Azamara fleet is sailing past our window.  It’s a bit smaller than our home for the fortnight, but it looks quite elegant, and even more important, it looks like a ship, not a floating block of flats.

We took the bus in to Civitavecchia today (Isn’t copy and paste wonderful?  You can copy‘Civitavecchia’ from anywhere in your text and simply paste ‘Civitavecchia’ back again where you need it!).  You could walk out of the harbour, but it takes you 20 minutes or so.  I remember doing it a couple of years ago when it was calm, but walking into a 25mph wind is not my idea of fun, especially when the bus is free.  We were going to have coffee at the cafe we used last year for our WiFi, but alas it was closed and shuttered.  Gone.  We walked up the main street of the town and I bought a wide flat paintbrush and a smaller one too.  We visited a wee market and liked the fact that the local trees had been allowed to grow and the roof of the shed that held the market had been built around them.  We had a pizza and a beer each at a wee restaurant where the service was very slow and so was the WiFi, but it met the specification of being free, the WiFi, not the beer and pizza.  We had a short walk along the prom, but it wasn’t much fun with the wind roaring in off the sea, so we went back to the ship.  Security is tight in Italy.  Armed soldiers at the bus station and yesterday there was an armoured car and soldiers at the ship.  It makes you realise just how dangerous life is these days.

Back on the ship, Scamp went for a swim while I put the second load of washing in the machine, then joined her at the solarium pool where, despite the cloudy sky, the roof was rolled back and the water in the pool was lovely and warm.  Came back to take the washing out of the tumble dryer and had quick G&T to prepare us for dinner.

It should have been a tropical themed night, but there was little evidence of it on this dull ship.  Apart from the waiters all dressed in colourful shirts, there was no tropical atmosphere.  One dire singer who was apparently Kenny Rogers singing songs for the geriatrics, the entertainment was worse than usual.  They appear to be catering for a much older demographic than the one we are living in.  One of the table guests at dinner knew everything about everything and expounded on it at great length.  The only thing he didn’t know was how to shut up.  The rest were fine.

Dead beat after dinner and went to bed early.  This cruising is tiring.

This upload is brought to you courtesy of JMM in Ajaccio.  Dear beer, but tastes better than the ship’s Carling.