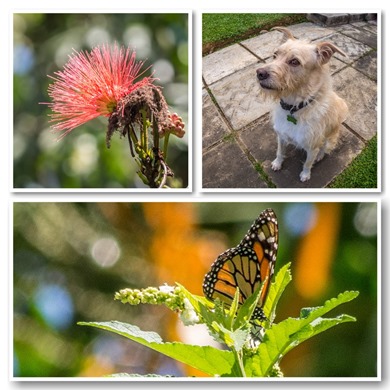 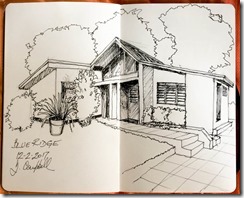 too.  So, after they’d left leaving Ori and I in charge, well, really it was Ori who was in charge and I was just getting in the way of his morning nap.  With Ori concentrating on his sleep pattern,I started a sketch of the house from a viewpoint at the front gate.  I gave myself a time limit of one hour and managed to get it completed in just over that time.  I’m quite happy with it apart from one little mistake.  By the time I was finished, I just had enough time for a shower before the others came home.  Ori was still sleeping.

We had a light breakfast because we were booked for lunch at the Crews Inn at the place that begins with a C and I can never remember its name.  I’m going to look it up now.  Ok, it was Chaguaramas.  Bing had the answer.  I hate Bing – It’s like most things Microsoft.  It’s crap.  I did say ‘most’ things.  Excel is brilliantly powerful and Live Writer is the best blogging prog I’ve used, but Bing is just painful to use. Why is it called Bing?  Apparently because it was short and memorable(?), but we all know it’s Because It’s Not Google, and in my opinion, it never will be.  Anyway, we were going to Chaguaramas for lunch at the Crews Inn.  In the mean time I managed to capture a couple of shots of the Monarch butterfly that’s been annoying me all holiday.  It thought it was out of reach, high in a tree, but it reckoned without the power of the 200mm lens on the Oly 10.  It was snapped!  As was the wee bit of bright pink blossom.

The Crews Inn is a lovely place, especially if you are a sailor.  I’m not, but it’s still a great location, right on the seafront with a vista that takes in fishing boats, skiffs, real yachts and big mega pretend yachts owned, no doubt, by millionaires.  We weren’t coming to see the boats, we were coming for lunch and I was going to have a glass of their very alcoholic Sangria.  It turned out to be not as good as the last one the others had, but it was still very rich and tasty.  I think we were all a bit disappointed when we were told that it was a buffet on a Sunday, but hey ho, it’s still food.  Indeed it was food and food a plenty.  We started with a salad and then went for the meat and fish option.  Then there was the dessert menu to investigate.  Really, I think Jaime and I did overdo it a little bit, well, a lot really.  It’s hard not to when there is this much food on offer.  That’s what I love and hate about buffets.  I love the selection, I hate the fact that I just pig out.  One day I’ll learn, maybe!

When we got home, I had to go for a snooze.  The food and the heat just got to me.  It was lights out for a while.

Later, we started the inevitable packing.  I’m about half packed just now.  I’ve now got to decide exactly what to wear on the plane and the train as we move from 25o to 5o.

Listened to some ‘pan’ from the semifinals at Savannah.  It’s nothing like the real thing.  Jaime is still listening to it on TV now.  Despite my wee snooze this afternoon, I’m beat and beddy byes is calling.  Good NIght.