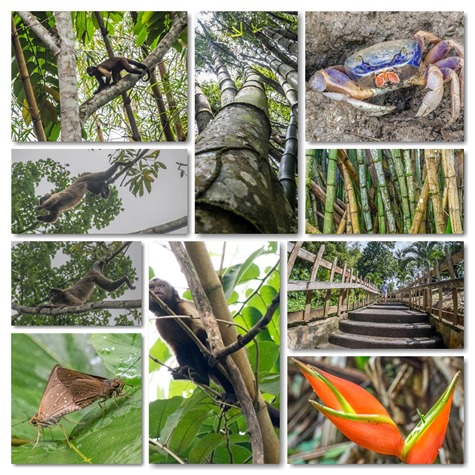 Today we set off after breakfast for Chaguaramas to walk into the Bamboo Cathedral.

I don’t know what I expected, but I wasn’t ready for the sign warning us to

I thought we were going for a leisurely walk.  I forgot to pack the AK47 and stab proof vest.  Bummer.  However, once we walked past the entrance gate, I forgot all about that.  This was jungle!  Well, jungle with a wide tarmac road through it.  The trees round us were enormous and there was some bamboo too, but nothing ‘cathedral-like’.  Then we turned a corner and there was the bamboo.  Not one or two clumps, but hundreds  – everywhere.  Now I could see the ‘cathedral’ reference.  The bamboo arched over our heads from both sides and met in the middle making it look and feel as if we were walking through a green tunnel.  We walked the length of the bamboo tunnel and then started climbing the hill at the end.  As far as we could see, the bamboo was finished.  We turned to go back and Madeleine stopped to ‘rescue’ a piece of vine from the depredations of some weeds.  Jaime managed to wrap some banana leaf round it and tie it off with a bit of creeper to keep the roots damp until we got it home and could replant it.  It was a rescue vine.  We walked back through the Bamboo Cathedral and just before we got to the high trees, Madeleine notices movement in the bushes at the side of the road.  I started mentally ticking off the warnings on that sign, then we all saw the monkeys.

Madeleine said they were Capuchin monkeys.  I was too busy trying to get a decent shot of them in the low light that filtered through the canopy.  Eventually, I gave up, switched on fast continuous shooting and fired off seven or eight shots at a time, gave the camera time to deal with them then fired off another seven or eight.  I tried a video, but the Oly 10 isn’t really up to that kind of task, and when I checked later, there was nothing useable on either video.  Everyone had a great time looking for new groups who seemed to appear from nowhere, climb high into the branches above our heads and jump the gap across to the other side  Adult and babies all made the journey without injury although some were better at jumping than they were at catching the branches on the other side and there were a few almost tumbles.  Once they were all over, they started feeding and it was time for us to move on.  Great fun for all.  All the time we were watching the monkeys, people were passing by, all saying “Good Morning” and none really batting an eyelid at the monkey gymnastics.  I’m guessing this is a normal occurrence here.

When we got back to the car, we drove on to Macqueripe Bay where we descended the stairs, under the screaming people on the Zip Wire above us, down to the beach.  Lovely little beach with what might have been a harbour at one end and a sort of short promenade above the sand.  The water looked lovely and clear and I wished I’d brought swimming stuff.  The whole place had a strange 1950s look to it and reminded me of the Lido at Bothwell Bridge near Hamilton.  Lots of folk swimming and just enjoying the sun, but then it was Saturday after all.  I got photos of some crabs before they dived down their holes.  They were well back from the sea and I wondered if they sneaked down the steps onto the beach at night.  From the promenade you could look out past an island to just see Venezuela in the distance.

After the short visit to the beach, we walked back up to the car and Madeleine drove us home via the supermarket which seemed to stock a lot of Waitrose goods. Which made me wonder if it’s an offshoot of that business.  We saw all the usual supermarket stuff and then some things you don’t get back home, like Chicken’s Feet again.  Scamp even took a photo of the aforementioned delicacy to show to the disbelieving ones back home.  On that subject, I did spot a cafe on the road advertising Cow Heel Soup.  Apparently it’s a local delicacy and the soup is really good.  I just hope they wash the cow’s heels well before making the soup, having seen the stuff that cows walk through!

Lunch was stewed chicken with fried plantain and salad, followed by coconut ice cream.  Maybe a notch down from the ice cream we got in Karawak, but still better than anything we get at home. 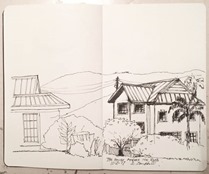 Today’s sketch is of the house across the street with a bit of M&J’s house added in to set the scene.  Actually, after I was finished, I preferred the lightness of M&J’s house to the lumpy looking other house.  The perspective is much more pronounced with the viewpoint closer to the small house.  Worth another go, I think.  Maybe tomorrow.