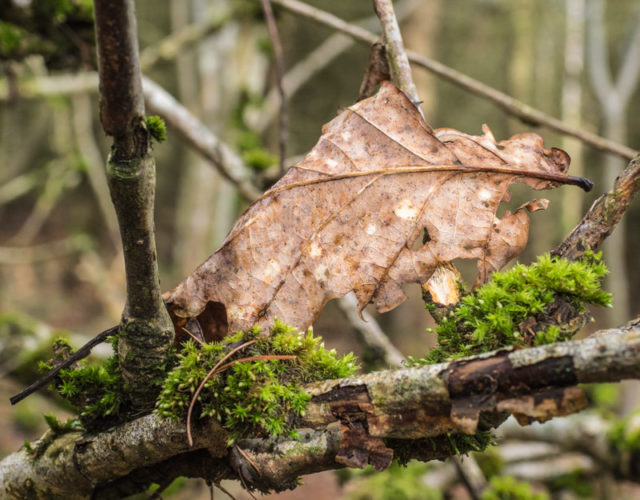 Scamp went foraging in Tesco today and came back with EIGHT tins of tomatoes! Success!!

Who would have thought six months ago that two cardboard containers of tomatoes could elicit such joy? It must be how the original hunter gatherers felt coming back to the cave with their arms full of food. It seemed that Tesco were being sensible for once and limiting shoppers to two boxes each of tinned tomatoes. Now they need to do the same with toilet rolls. That will come, I’m certain, but not without a lot of weeping and wailing and gnashing of teeth.

For the rest of the day, I went for a walk in the afternoon, just over to St Mo’s. Managed to grab a couple of photos of leaves in a bit of warm sun, then everything went a bit dark as a hail shower blew in. I sheltered in the trees until it passed and then came back out to grab another set of shots of the same leaf, but wet this time. Waited another few minutes and the sun came out again and took my final shots against the light, trying to get some detail in the veins and in the dried fleshy part of the leaf this time warmed up in the transmitted sunlight. Despite all my efforts and the great colour contrasts of the third lot of shots, it was the wet leaf shots that looked best and that’s what became PoD.

Scamp made some soup “Just Soup” as it’s come to be known and we had that for dinner. The tins of tomatoes have been squirrelled away upstairs out of temptation’s way. We may get some more, but we won’t be greedy. We did well today.

On the virus front, it was announced in the afternoon that Scottish and Welsh schools will close on Friday. What this means to exams is anybody’s guess. Some say the SQA may use prelim exams as a marker for grades, but not all subjects have prelims (“mocks” in England). Some say continuous assessment could be used and some say that the exams should be rescheduled until later in the year. None of these alternatives are really going to change the fact that the results this year will be unrepresentative of pupils’ work. Who would be the Education Secretary? To compound matters, it’s just been announced that English Schools will close on Friday too. Reminds me of the Alice Cooper / Michael Bruce song – “School’s out for Summer, School’s out forever”

Tomorrow I’m hoping to have some coffee delivered. Get the essentials sorted out, then we can think about the luxuries!