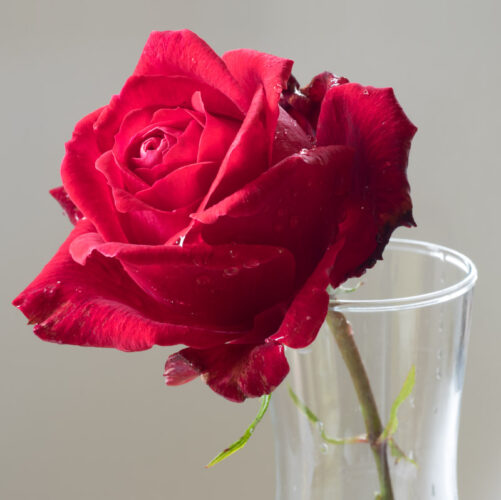 Rain in all its forms today. Heavy rain, light rain, smirr, drizzle, we had them all. Then after a full day of the wet stuff it dried up about 8pm and gave us a beautiful sunset. That’s Scotland for you.

Spoke to Hazy on the phone for a while in the morning and spoke to JIC in the evening, so it was a fairly phone filled day as you will find out below.

Scamp’s sister came over from Eastfield to have her lunch and a natter, leaving me a chance to get the sewing machine out and create another face mask. I wasn’t totally happy with it, in fact it’s one of the worst designs I’ve seen so far. It goes in the bin.

Because of the weather, there wasn’t much chance to take any outside photos. The closest I got was taking out my chilli plants to get watered with clean, unchlorinated stuff, but I had a look around and couldn’t see anything worth switching the camera on for.

Later in the afternoon Scamp brought a Ruby Wedding rose in from the garden to prevent it being battered by the rain. I took one look and decided I’d found my PoD. Beautiful texture and colours with a few raindrops to give some highlights. Done!

Most of the rest of the day was spent tweaking the last few apps on Scamp’s new A41 phone. It’s much like mine, but her apps are nothing like my collection, so I was working with one eye on the phone and one on the help files I’d found on the net. Together the two eyes finally got the better of the phone demons and everything fell into place.  I think that’s us all set.  The phone number is updated. Most, if not all the apps are in place and working.  Just a few more checks and we’re done.

Struggling with Luminar 4 now on the Mac.  It used to work really well, now after an update it’s going like an arthritic slug.  Do slugs get arthritis, I wonder? If they don’t, they should. They’ve eaten holes in my kale plants and I’m sure its them that are responsible for  the disappearing carrots.  I’ve had enough for one day.  I’m off to bed.

Scamp is out with the Witches tomorrow and it looks like a good day.  I may go out and take some photos.