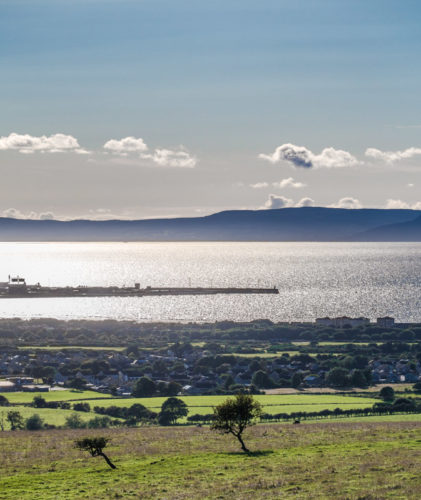 Today after a lazy morning without any drawer rearranging, we drove down to Kilmarnock to see our friend Dorothy and her son, Colin.

Well, that was the intention, but we got as far as the Robroyston turn-off before CIRTRAC lit up with the happy news that there had been an accident after junction 16 of the M8. Just what we needed! Not to worry, it’s never usually as bad as they predict. A mile or so later, it was as bad as they predicted, in fact it was worse. The queue had backed up on to the M80 we were on. I took the next exit on to the M8 going in the opposite direction. From there we could go south on to the M74 and then take the exit to East Kilbride and from there onto the M77. Sounds complicated, but it was preferable to sitting in the carpark that is the M8 when there’s an accident somewhere ahead. As it happened we got to Dorothy’s place only about fifteen minutes late.

We spent about an hour with Dorothy, showed her some of our holiday pics, but she began to feel tired and we left her with her son looking after her. She looked a bit more tired than the last time we’d visited and we did have far too many holiday pics. We really need to make the effort to visit more often, but not stay as long.

It was still a lovely day, so we decided drive on down to Troon. Got parked without any bother at the harbour carpark and walked from there into town. The town was jumping. Hunners of people on the beach, but thankfully only dogs in swimming. If there were folk in swimming, they would probably have needed an ambulance in attendance. The sun was warm, but I’d imagine there were baby icebergs out there in the wet stuff. Wandered round the ‘town centre’ to give it the benefit of the doubt. Scamp wanted to go for lunch at The Lido. I’m not a big fan of it. You always have to wait ages for a table, even if you’ve phoned ahead to book one. Once you’re seated, you have to wait ages for the food. However, the food, when it arrives is worth the wait … almost. I suggested we give Scotts a go. It’s from the same stable as The Lido so hopefully the same quality of food, but without the wait. I was right on both counts. Food was great – Fish ’n’ Chips for Scamp (what a surprise) and Roast Chicken for me, but roast chicken with Smoked Carrot Puree among the sides! Interesting taste. The most remarkable thing though was driving into the restaurant carpark. It brought me in mind of Crews Inn at Chagauramas in Trinidad. Without the palm trees obviously. Sitting looking out at the boats in the marina under a beautiful blue sky just emphasised that memory. I think we’ll be back … to Scotts that is. I’d love to think that one day we’d go back to Crews Inn at Chagauramas too with its lethal brandy based Sangria.

Today’s PoD was taken just outside Dundonald on  the hill up from Troon and is looking over Troon to Arran.  I just had to stop to grab a shot or two … or twenty eight!  It’s been through Lightroom a few times, but I like the finished result.  Click on it to see it bigger in Flickr as usual.

Tomorrow we leave the blue skies behind and return to the land of the rain. Oh well, at least we had one really good day this week.