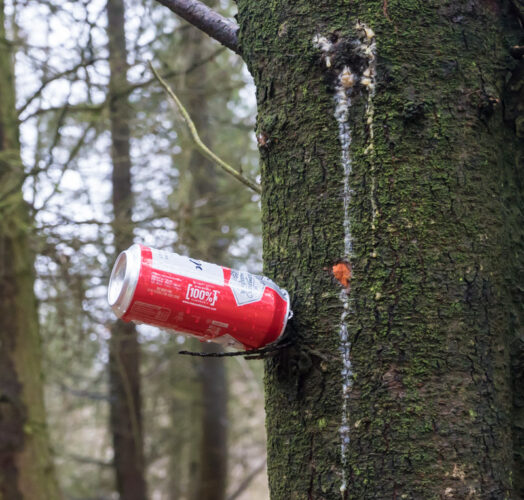 Yet another dull day, but no snow, well not yet anyway.

My task for today apart from painting grapes for EDiF and 28DL was to spend £25 of my first £50 on food for the food bank in Tesco. We had both agreed at the start of the Covid survey that half our ‘payment’ for doing the survey would go to buying food for a food bank. The easiest way to do that was to buy food with the voucher in Tesco and put it into the in-store box for the local food bank. It makes sense to us.

So before lunch, I drove up to Tesco to spend some money. I managed to spend almost exactly the value of the voucher. It felt good to just lift some essentials and put them in on side of the trolley while my own shopping went in the other half. As well as essentials I put in some other wee things too, like a bottle of HP Sauce and a bag of coconut snowballs. Man cannot live by bread alone, and neither can families. I think I surprised the lady at the checkout by dumping almost all the food in my trolley into the food bank box after I’d paid for them. She shouted after me “Thank you! Thank you very much!” That made the day feel better, that and having done it. Spending money that I’d decided wasn’t mine to keep.

Back home, lunch was a bowl of soup and a “Fish Finger Sandwich”. A delight I’ve only recently discovered. Two fish fingers in a sandwich with tomato ketchup! If you haven’t tried it, you don’t know what you’re missing! Put fish fingers and plain bread on your shopping list. You won’t regret it.

Our appointment for the Covid survey today, our last weekly one, was for 3.30pm and after a long phone call with Margie who is a member of Gems and a fellow painter (can a lady be a ’fellow’?). Anyway after the phone call I put my boots on and walked out into the rain to see what St Mo’s had to offer. Not a lot actually, but I got a weird photo of a beer can fixed on a tree branch. Why would anyone do that? I know it’s just plain vandalism, but if this were in an exhibition in the GOMA it would be called an installation and be praised by those who also praised the Emperor’s New Clothes. Anyway, it made a ‘different’ PoD.

After dinner which was a new take on Fish ’n’ Chips, Scamp’s version, sautéed potatoes instead of chips, probably healthier and certainly just as tasty after this meal I started on today’s prompt. At Tesco this morning I’d bought a bunch … or two (just in case), one red and one green. The green grapes won, mainly because the red grapes were sweeter and are now nearly all gone. That’s why I like painting fruit, you can eat the evidence. 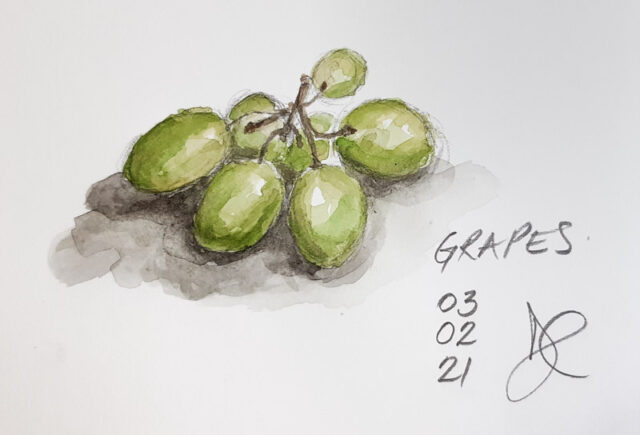 No plans for tomorrow. The weather fairies seem undecided as to whether we’re getting snow or rain. It will probably be that delightful mixture, sleet. If it’s dry we’ll probably go out for a walk. If not we won’t. Isn’t life delightfully simple sometimes.